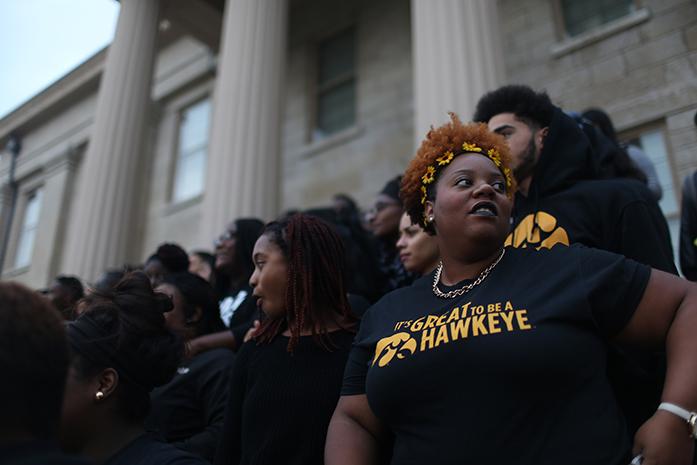 Iowa senior Mariah Dawson stands in a group for a photo on the steps of the Old Capitol building during a demonstration of solidarity in Iowa City on Wednesday. Students gathered in reaction to alleged racially driven incidents on the University of Mizzou's campus. (The Daily Iowan/Brooklynn Kascel)

Students on campus have a new way to speak their minds in a safe space.

The University of Iowa Center for Diversity and Enrichment office is hosting a three-day listening session that started Monday and will continue through Wednesday.

The sessions were a direct response to the incidents that happened at the University of Missouri last week, said Diversity Center Director Nadine Petty.

“Because of what was happening at Mizzou, there were a lot of students on this campus at the University of Iowa who were expressing a lot of hurt and pain,” she said. “It brought up a lot of things for them, and it actually mirrored a lot of their experiences here.”

Petty said the outcome of the incident at Missouri made it clear a forum was needed as a safe space for students, including black students, to be able to express themselves and to discuss ways to address the issue with faculty and staff members.

Kyra Seay, an educational support services assistant at the center, said the center works to help create safe and inclusive campus climates for all members of underrepresented groups in order for them to thrive and succeed on campus.

“At this moment, we are still in the discussion phase. We still have two more sessions,” Petty said. “At the end of Wednesday, we are going to take all the information we gathered, suggestions from students, and figure out what needs to happen from that point.”

The general concerns students brought up in Monday’s discussion included negative experiences in classrooms, working with authority figures who were not equipped to deal with racial conflict issues, not having anywhere to go to voice concerns, and not feeling safe in the dorm rooms, Petty said.

“It’s clear at this point, after the first session, that training for staff and faculty is going to be key,” Petty said.

Currently, the university has the National Coalition Building Institute and the BUILD training certificates to educate UI faculty and staff on ways to provide a welcoming and inclusive environment for students.

“The training is already sort of happening, but it’s not required,” Petty said. “It’s good that it is here, but what I’m hearing in my own opinion is that it may be useful to make all of this training required.”

Seay said she hopes the sessions will ultimately open up lines of communication and create a functioning, supportive relationship between students and the various parts of the administration — and also establish some level of accountability.

“Students are coming to these sessions to give us a gift, they are opening up to us about their experiences, and we want to do right by that.” she said. “I hope that they walk away knowing that there are people who care, who are listening, and will act.”

Petty said the Diversity Center wants the conversations to lead to actions and bring about positive change.

“We don’t want it to be just three sessions, and then we don’t talk about it anymore,” she said. “We also don’t want it to just be all talk. The talk is a precursor to some action down the road.”

Some students who attended today’s listening session declined to talk to the DI. They said they did not want to prematurely speak and instead wait until an appropriate time.