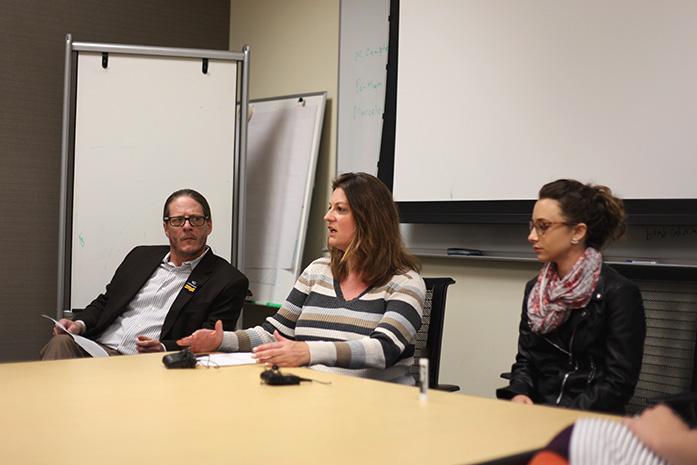 The rally against University of Iowa President Bruce Harreld and the state Board of Regents continues on campus.

Iowans Defending Our Universities and the University of Iowa’s graduate student union, COGS, held a press conference in the University Capitol Center Monday to discuss their upcoming plans. Media crews lined the back of the room in order to hear the announcements from both organizations.

Representatives from both groups announced there will be a Campus Community Assembly on at 7 p.m. today in Van Allen. Organizers’ hope is to teach members of the community, students and anyone else about the broad issues the campus faces.

COGS President Jeannette Gabriel said the purpose of the assembly is to allow people to openly discuss their concerns.

“The point of having an assembly is to represent the community and campus in order to strategize together,” she said. “This way, people can share their ideas and feel like their voices are being heard. People can discuss what they want to say regarding the regents.”

In advance of this week’s events, anti-Harreld posters appeared around campus on Sunday night. Numerous voices on campus have spoken out against the regents’ decision to appoint Harreld as the UI president, taking issue with a search process they view as opaque.

Gabriel went on to announce there would be two guest speakers during the assembly: graduate students from University of Missouri, which has been embroiled in controversy over how the campus handled racial incidents. The system’s former President and businessman Tim Wolfe resigned after a hunger strike, football team boycott, and more actions calling for him to step down.

She said the Mizzou students would talk about the similarities between the two campuses — including having presidents from business backgrounds whom some activists view as inappropriate.

COGS and Iowans Defending Our Universities are calling for a forum with Harreld in order to discuss their displeasure. So far, Harreld has not agreed to a public forum. He has expressed a preference to meet with stakeholders one-on-one, including in an email exchange released between Harreld and COGS communications head Ruth Bryant.

Gabriel said a forum would help the community and school members get an idea of the goals campus members want to achieve.

“The whole point of the forum would be to agree on a set of goals, both long-term and short-term,” she said. “It would provide a social framework in which those goals can be set forward.”

“We have come together to host some events and are thinking of events long-term,” he said. “Harreld’s appointment has provided a focus of our group, but it is not the only one.”

So far, Iowans Defending Our Universities and COGS have hosted many events around campus, particularly a protest at the last regents’ meeting in Iowa City last month. Gabriel said she expects momentum and turnout to rev up as the campaign continues.