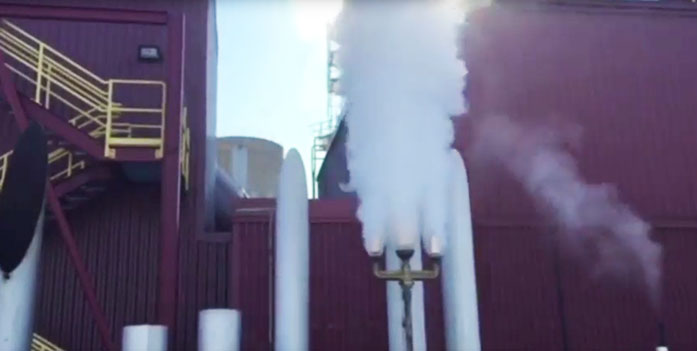 For nearly 80 years, Iowa City has heard a thundering sound coming from the Power Plant on the river four times a day.

But recently, the whistle has sounded a little different.

The University of Iowa Power Plant sounds off a whistle at 8 a.m., noon, 1 p.m., and 5 p.m. every weekday. Originally used to signify the beginning and end of the workday and the lunch hour, the whistle continues to sound today to uphold the 76-year old tradition.

The old whistle, installed around 1992, was replaced with a brand-new whistle Nov. 3 — one that sounds a little louder and, to some, a little more unpleasant, because Power Plant workers are still trying to tune the whistle.

“The [old whistle] sounded like a really horrible shriek,” the plant electronics and instrumentation supervisor Kyle Smith said. “It was steam-cut. Basically, when steam travels over metal a number of times, it has grooves cut in it, and it can alter the sound. Parts for the one we had up there were so far gone that there was no point in replacing individual parts.”

Besides proclaiming the time of day, the whistle has been used to signify severe weather, signal air raids during World War II, and even to celebrate after the Hawkeye football team scored a touchdown when the stadium was located on the east bank of the Iowa River decades ago.

Becky Mohn, a worker in the plant, said one of the few times she recalls the whistle not being blown as scheduled was during the flood of 2008, when the whistle was out of commission.

A simple button in the plant’s control room operates the whistle. The button activates a 20-second timer and opens a valve, releasing 155 pounds of steam up to the whistle on the plant’s roof.

The steam comes out three whistles, each a different size and pitch, creating a chord. A plume of steam blasts into the sky and disappears after the 20 seconds is up.

UI President Emeritus Willard “Sandy” Boyd, who has been a UI faculty member since 1954, said he has heard the famous whistle thousands of times.

“It is our faux campus campanile, since the sound of the Old Capitol bell is not as pervasive,” Boyd wrote in an email.

Smith was responsible for conducting the approximately $7,000 replacement project. He has done extensive research about the whistle’s history.