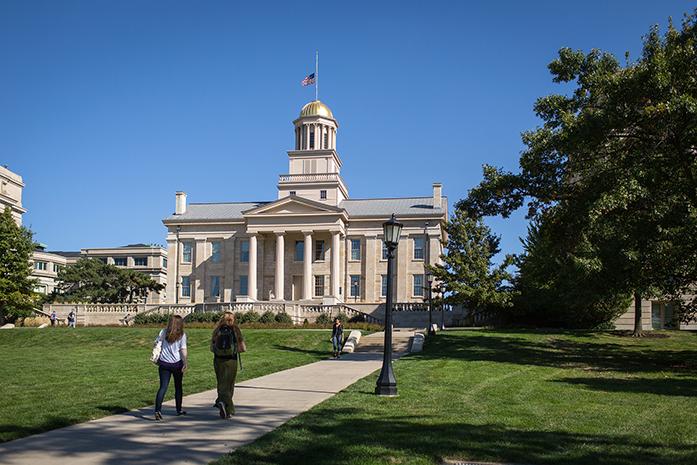 Consideration to establish a faculty union at the University of Iowa is real and the conversation has begun.

An event held Thursday in the Main Library Shambaugh Auditorium featured a University of Illinois faculty member sharing insight into the school’s recent successes in forming a union and how the UI could begin to do the same.

“Every campus has different issues that they need to kind of rally around in order to make changes,” said Jennifer Ashton, the speaker at the event, titled To Beg or To Bargain.

The room was filled with around 50 people who engaged in a session of Q&A related to where the UI currently stands and how unionization may be possible with time.

“I’m eager to hear about faculty and hear what they feel like their issues are,” Ashton said before the discussion.

Ashton opened her dialogue by applauding the UI faculty for their refusal to give in on the appointment of Bruce Harreld as president of the UI.

The idea to form a collective-bargaining union has largely been influenced by the hiring of Harreld and the lack of shared governance that faculty claim has appeared in the process.

“I think the regents have made it clear they do not respect shared governance,” said Loren Glass, an English professor who helped organize the event. “The faculty is not organized, so we really have no leverage in determining either fiscal or academic policy.”

The University of Illinois-Chicago filed to form a union in 2012 and achieved its first successful contract with the university in 2014.

“We have significantly improved things such as better parental leave for people, who were getting two weeks off,” Ashton said, noting that parents now may receive a semester of paid leave.

She said putting the work forward to gain support has been a rewarding yet lengthy process to make the changes University of Illinois-Chicago’s faculty saw fit.

“I knocked on a lot of people’s doors who just said, ‘Go away,’ ” she said. “You have to have those conversations, and that’s where some strategy comes in.”

At the meeting there was a representative from the American Association of University Professors, a labor law specialist, and a number of individuals who voiced support for the idea to unionize.

“I think it would be premature to call it a movement at this point, although a number of people are interested,” said Lois Cox, the vice president of UI’s faculty-association chapter.

Cox said people need to first become more informed about how a union is formed.

Ashton also noted that while legally, there may be differences in the two schools, they are closely related in structure and student-body size, making for a productive conversation at the event.

“You have to have an awful lot of people willing to commit,” she said.