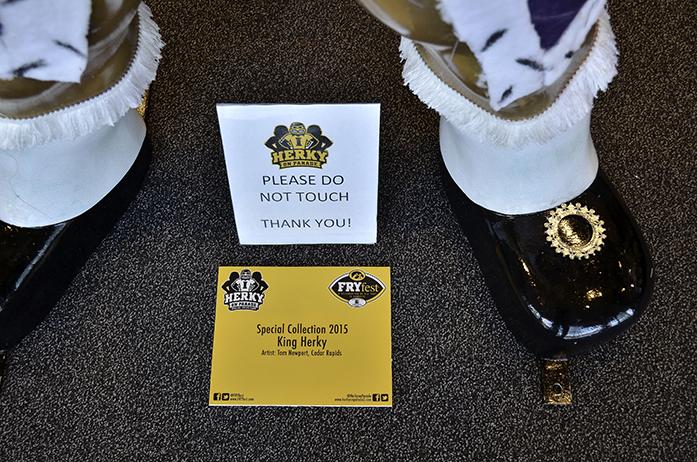 New Herky statues, painted by artists in the community, are on display at the University of Iowa Hall of Fame. (Daily Iowan/Karley Finkel)

Six Herky statues are lining floors of the University of Iowa Karro Hall of Fame this week, each one    sporting its own unique design, including All Sports Herky, Big Ten Tour Herky, Franken Herky, King Herky,   Leprechaun Herky, and Santa Herky.

Each will eventually be for sale to the general public. The statues are a part of the 2015 Special Collection of Herkys revealed at this year’s Fry Fest celebration.

The Special Collection comes after the 2004 and 2014 Herky on Parade events, each to celebrate the 75th and 85th anniversary of Kinnick Stadium. The Herky on Parade idea came from Chicago’s Cows on Parade    and Cedar Rapids’ American Gothic All Over programs.

The Iowa City/Coralville Convention Visitors Bureau, the University of Iowa, and area businesses chose the designs based on local submissions and community requests after the 2014 Herky on Parade.

Six artists from across Iowa were chosen to design the Special Collection statues.

Tom Newport, the artist who designed King Herky, said it’s always great to see his work displayed in the community.

The outdoor sculptures, whether it’s the Herkys or the American Gothic thing in Cedar Rapids, are all valuable programs for cities to take part in,” Newport said.

The Herky character was created in 1948 as a cartoon character and officially took the field in the mid-1950s as the Iowa mascot.Michael Rooney, assistant director of special events at the visitors’ bureau, saidalthough there is always a demand for Herkys, it hasn’t been determined if new

Herkys will be released each year. Another mass production of Herkys, like the Herky on Parade celebration, won’t happen for another 10 to 15 years.

Rooney said Herky on Parade and this year’s Special Collection are fun experiences for the community that families and Hawkeye fans have come to enjoy. 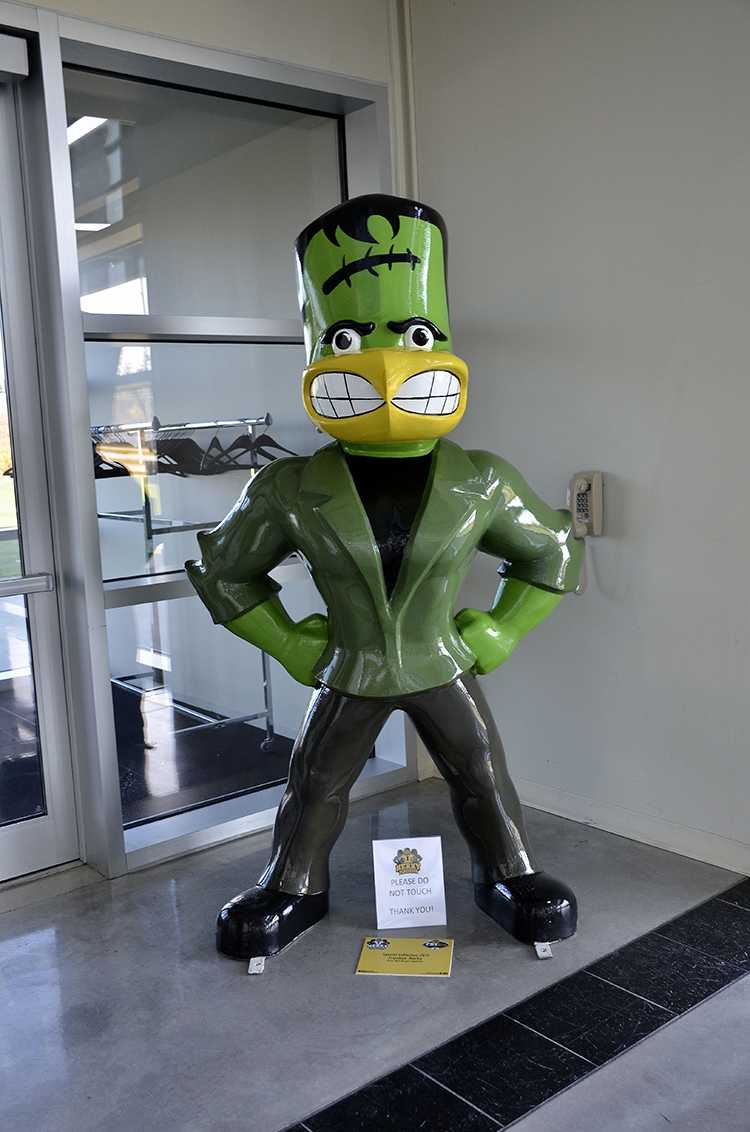 “Being so close to the UI, everyone is a Hawkeye fan here,” Rooney said. “It’s a unique piece of art that’s relevant to the city and this area.”

Dale Arens, director of the Athletics Hall of Fame and UI Trademark Licensing, said the Herkys were brought to the Hall of Fame so the statues could have more public exposure before going on sale to the community. One of the statues, Franken Herky, was on display at Kinnick over Halloween weekend.

Arens said the statues have been extremely popular since being displayed at the Hall of Fame.

“Obviously, Herky is an icon. Everyone identifies with the Hawkeyes,” Arens said. “Allowing Herky to take on the different personalities that Herky on Parade allows is something kind of fun for people.”

Rooney said there haven’t been issues of vandalism so far since Fry Fest and the Hall of Fame has been the statues only exposure. Vandalism has been an issue in the past.

The Herky statues will be displayed at the Hall of Fame until Nov. 8.