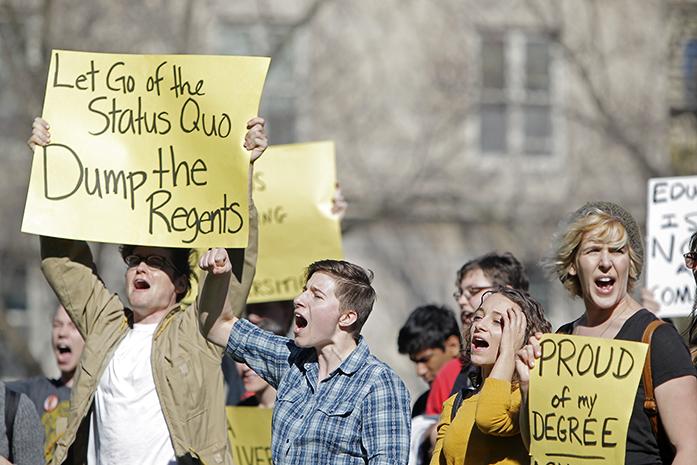 University of Iowa students and faculty gather in front of Jessup Hall on Monday, Nov. 2, 2015. A new University organization, Iowans Defending Our Universities, protested the Board of Regents suggesting they resign. Monday, November 2, 2015 was the first official day of Bruce Harreld taking office as the new president of The University of Iowa. (The Daily Iowan/Courtney Hawkins)

By Ali Snider and Zhao Li

Members of the campus community spoke out as a new era was ushered in.

Protesters gathered on the Pentacrest to voice their disapproval of the state Board of Regents’ decision to hire Bruce Harreld, who went on the clock Monday as the University of Iowa president. They called on both the regents and Harreld to resign.

An organization called Iowans Defending Our Universities put together the rally, which began on the Pentacrest and moved to Jessup Hall — which houses the President’s Office — then through the IMU, chanting the entire way.

Hundreds of residents, faculty members, and students repeated, “Hey, hey, ho, ho, we won’t support the status quo.” When the regents hired Harreld, they said they hoped Harreld’s hiring would change the “status quo” on campus.

Participants cheered and clapped as people spoke throughout the event. Edward Wasserman, a UI professor of experimental psychology, said the regents’ actions harmed the university.

“We are now having our university set fire to by regents who do not care,” he said. “We are here to stand against them about academic ideals for our great institution.”

There were numerous signs in the crowd with phrases including “Harreld: Uniquely Disqualified,” and “Defend Our Public University.” Supporters at the event said they believed Harreld was handpicked and that the regents had engineered his hiring.

During the protest, faculty members came out and took over the steps of the Old Capitol dressed in robes and holding printed faces of long past presidents of the UI. They spoke from the perspective of the presidents and how each would have been displeased with the choice of Harreld to run the UI.

Brad Pector, a student representative for Iowans Defending Our Universities, said the organization believes the regents have not done anything about the issue.

“This time, we’ve seen a lot of new facts coming out. A lot of new things Harreld said we can pinpoint and talk to him about or protest about,” Pector said. “We have not seen much of a political change at all with what’s going on, so we are still out here protesting.”

History Professor Katherine Tachau, the current president of the UI chapter of the American Association of University Professors, said she believes the entire presidential selection process was illegitimate and illegal in many respects.

“He has shown by his résumé and his answers in the forum that he is not an honest person,” Tachau said.

John Logsdon, a UI associate professor of biology, said he was disappointed by the regents’ actions.

“As a proud Iowan, I am very sad,” he said. “Today, we cannot be Iowa nice. We have to stand up for what’s of value to us, and that’s public universities and non-corrupt regents.”

Many faculty members in attendance said they felt the UI was being treated as a corporation instead of an institution. Students and faculty at the protest agreed they would continue to press the regents — and Harreld — until they both resign.