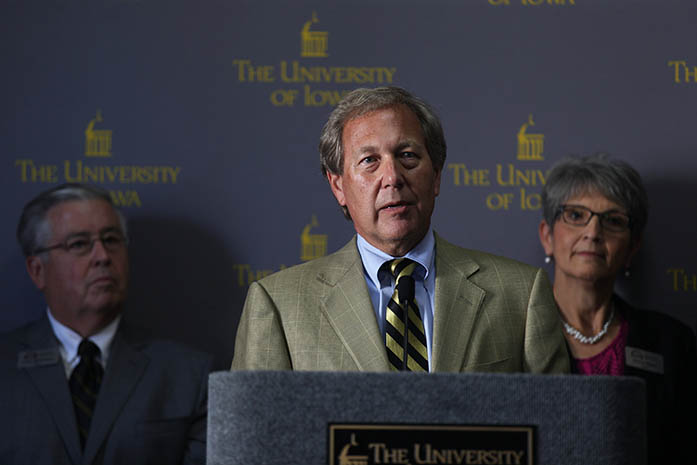 After a tumultuous two months following his selection, University of Iowa President Bruce Harreld will come to campus today to officially start his job. In those two months, Harreld has faced criticism over inaccuracies in his resume, his comments in public appearances, and as a proxy target for the state Board of Regents.

The selection process has been marred with charges of favoritism, given that Harreld was the only candidate to meet with both Gov. Terry Branstad and five members of the regents prior to his selection. Some, including previous Guest Opinion writers on this page, consider Harreld’s selection a political statement, meant to reflect a shifting view of education in times of budget cuts and growing student debt.

The UI Faculty Senate voted no confidence in the regents’ ability to govern early in September, followed by the UI undergraduate and graduate student governments. The UI chapter of the American Association of University Professors condemned the search process, and the College of Liberal Arts and Sciences Faculty Assembly even censured Harreld over his résumé, calling on the regents to resign.

Those opposed to Harreld’s selection have certainly made their voices heard, and they don’t show any indication that they’ll stop doing so. Today at noon, a group called Iowans Defending Our Universities plans to “gather on the Pentacrest to defend our university.” The tagline of the group, as seen on its Facebook page: “an illegitimate search has produced an illegitimate UI president.”

How does Harreld react to the controversy? In an interview conducted with The Daily Iowan on Oct. 30, Harreld said increased attention was “part of the territory” in leadership positions. However, he was surprised at how personal the rhetoric had gotten.

“Dispute is fine, but it needs to be civilized discourse,” Harreld said. “I have a phrase that says: Bite me in the nose, don’t stab me in the back. I think we owe the citizens of Iowa more than getting down in the weeds and behaving in the way that some of the community members have behaved.”

However, in the meetings he’s had with faculty members, Harreld said his experience has been productive.

“They ask me why I’m here, and I think that’s a legitimate question. They’re concerned about what perspective I would take on an issue. In some cases I’ve got some ideas, and in some cases I say I need help. Help me, educate me, I’m coming up to speed right now. [The faculty members] love this institution, and that’s a piece of this that’s important.”

The Daily Iowan Editorial Board believes the key to moving forward on this issue is to engage our new president in productive, not disparaging, conversations. Whether or not the regents resign is one matter, and the manner in which they selected a new president is a legitimate concern. But right now, Bruce Harreld is taking over where former UI President Sally Mason left off.  In order to make sure the UI is run to its fullest potential, it’s important to make sure faculty and students make our academic priorities clear to our incoming president, and give him a good-faith opportunity at leading this institution.