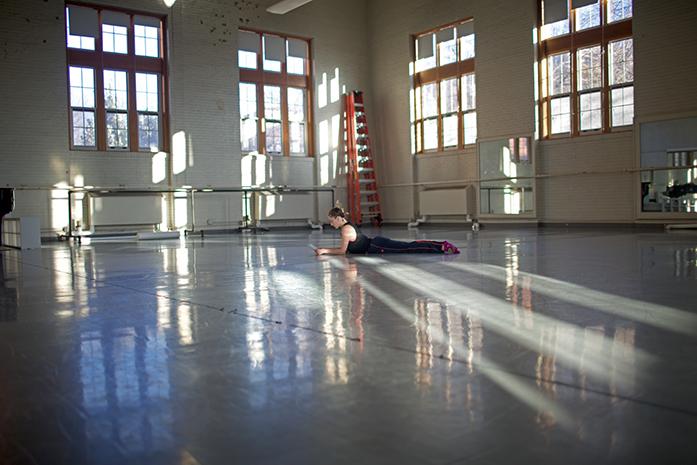 Autumn Eckman looks over the script for Yao Feng's poetry series, "Free Haikus Written in Seattle" before rehearsal in Halsey Hall on Sunday, Oct. 25, 2015. The International Writing Program and The University of Iowa Dance School are in collaboration for this project. (The Daily Iowan/Brooklynn Kascel)

The ballerina raises a slender leg, then bounds across the smooth floor. She transforms the lingering notes into movement. The scholar translates a sonnet. “Au revoir” becomes “adiós”; “adiós” becomes “goodbye.” Each interpretation shifts the form while the essence remains.

This interpretation will be presented at 7:30 p.m. Friday as the UI Dance Department performs visual representations of works by International Writing Program residents. The free show will take place in North Hall Space/Place.

Graduate-student dance students first ventured into choreographing IWP works two years ago. Now, it has become an annual event, with writers submitting pieces for consideration. From the varied pool of submissions, a few are selected.

This year features six writers hailing from South Korea to Austria, content ranging from metaphysical wars to dodo birds. Confronted with diverse prose and poetry, the choreographers face a challenge: how to translate writing into the often-wordless art form without losing its core.

“A poem has its own rhythm and body, just like the dance,” said Feng Yao, a poet from Macau. “Although they both are artistic forms, very different, they can dialogue and touch each other in order to find a harmonious movement language.”

Choreographer Autumn Eckman worked with Yao to bring his selection, Free Haikus Written in Seattle, to the stage. She explored the tranquil styles and themes of his poems, which he created while observing a Seattle park.

“I’m planning on the dance being pretty abstract,” Eckman said. “I don’t plan on doing anything spoon-fed or story-driven, because it’s not really written that way.”

Whether erratic, quiet, or mournful, the mood of the writing is crucial in choreography. For Estonian poet Anete Kruusmügi’s “The Secret of the City,” her choreographers strove to emulate her subject: New York.

In contrast to Feng’s placid park, Eckman attempts to transport audiences into a crowded subway car. On stage, dancers move in sync to imitate the car’s occupants united in their underground travel. Then the metal doors screech open, the crowd disperses into the city’s sidewalks, and the dancers fall apart.

“I know the dance can add something, remove something, and make it a little bit different,” Kruusmügi said. “I don’t know what is coming out of the dance, I only know what I want to say with this text.”

Each performance will be as varied as the writers’ voices. Some, such as Yao, have a light touch in the planning. Others, including Kruusmügi are engaged throughout. Always writing with performance in mind, she will alternate between reciting and dancing.

“She really guided the performance,” said choreographer Rebekah Chappell. “You get to know them through their writing, but it’s a very different experience seeing them move to their writing.”

Not every audience member can read Spanish or German, but Friday night, they can get to know the writer. Whether the writers are buried in the crowd or twirling onstage, their stories will unfold through the adaptations.

“It will be a visual feast,”said Rochelle Potkar, an Indian writer presenting her fictional excerpt “Dream Warriors.” “Dance doesn’t need a language; everyone can enjoy it.”.

Using the traditional epic Ramayana to comment on India’s corrupt justice system, her performance will transcend words with its fiercely angry emotion.

“I think the most important thing with any kind of performance is that it moves the audience somehow,” Kruusmügi said. “Whether it’s positive, negative, funny, it’s something that they can take with them.”