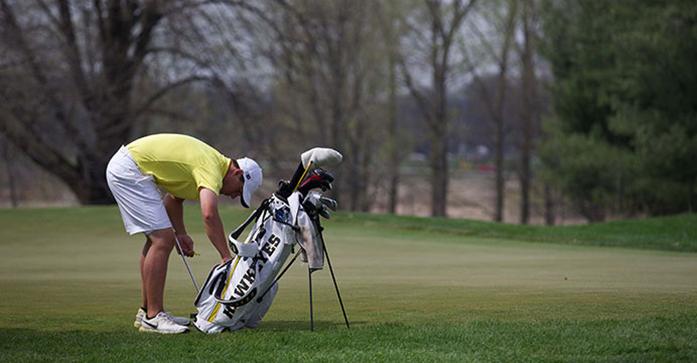 After a rainout anticlimatically ended the 2015 part of the golf season at the Royal Oaks Intercollegiate in Dallas, the Hawkeyes are moving on to the off-season.

The fall season had its ups and downs, leaving the team unsatisfied and hungry to win in the spring.

“We’re not happy or content with where we’re at, but it gives us something to work towards this off season,” men’s golf coach Tyler Stith said. “We’re extremely motivated, and we’re going to work very hard the next couple of months, and we’re looking forward to February.”

The team had a strong beginning of the season, winning its second tournament at the GolfWeek Conference Challenge and an individual title for junior Raymond Knoll.

The Hawks then had a decent outing at the David Toms Intercollegiate in Louisiana, finishing fourth, but then came in last at their next tournament, the U.S. Collegiate Championship, leaving a bitter taste in their mouths.

“We just have to be more consistent, and we need to get smarter as a team in ball management, course management, and limit the mistakes on the golf course that will lead to high numbers,” said junior Carson Schaake. “If we can do that going into the spring, I think we can have a lot of really good tournaments.”

For Schaake and the team, consistency was an issue toward the end of the season, and that is something they will be focusing on over the off-season.

Schaake emphasized the importance of consistency. In the U.S. Collegiate Championship, in which he strung together two strong rounds of 71 (minus-1), he then faltered in the last round, shooting an 82.

“I’m going to try to get in better shape over winter break,” Schaake said. “I’m going to work out hard and try to strengthen my core. If you can do that, it gives you an edge over the kids who might not be in that good of shape.”

Along with consistency, Schaake believes that strengthening himself will give him an advantage over competition enabling him to hit the ball farther and to play strong throughout whole tournaments, which sometimes are 36 holes long.

Along with individual practice and weight training, the players are also expected to play in a couple tournaments individually over winter break.

“Over winter break, I’m playing the Patriot All America Tournament down in Arizona,” Schaake said. “It’s an invitation-only tournament, and Ray and I were invited.”

Because the off-season spans from late October to early February, getting in a couple competitive tournaments in during that period of time is good practice for the players.

But overall, the disappointing end to the season for the Hawkeyes  fuels their hunger to win come springtime.

“If we can get dialed in over the winter, have a good winter break and work out hard, get everything ready for this spring, we can really do something special,” Schaake said. “If we get on a run, we can make it to regionals, get through regionals, and get to the national championship and that’s what we’re all hoping to do.”