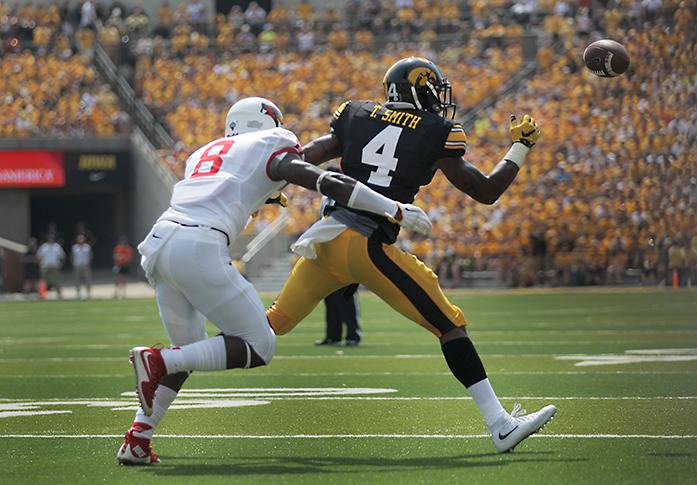 Iowa wide receiver Tevaun Smith attempts to catch the football with Illinois State La'Darius Newbold close behind during the Iowa-Illinois State game in Kinnick on Saturday, Sept. 5, 2015. The Hawkeyes defeated the Redbirds, 31-14. (The Daily Iowan/Margaret Kispert)

See what Iowa football players had to say in this weekly segment.

Each week the Hawkeye football players meet with media to discuss anything and everything. Coming off a bye week, Iowa is 7-0 and in the top 10 of the AP poll for the first time since 2010.

The No 10 Hawkeyes are home Saturday, with kickoff against Maryland slated for 2:30 p.m. on ABC or ESPN2.

Here’s what Iowa players had to say.

Wadley had said fumble problem, but has motivation to not do it again, “After the first game of the season I fumbled, [my mom] cracked a lot of jokes about me and made me really mad. She tried to knock the ball out of my hands (Wadley sometimes carries around a ball to practice keeping a good grip). I think about that all the time.”

On what he’s seen from Maryland, “It could be a good day.”

On his running style this season, “The spin was one of the moves that I thought I was best at, but I’ve been getting hit off the spin and it hasn’t been working right now.”

And where did his jump cut come from? “Natural instincts, I try to press the play as much as I can. When I can’t get out, I jump inside, that’s where the play is — inside.”

Iowa’s being talked about in the national media but, “We don’t listen to that stuff, we’re 7-0, just seven games into the season and where we wanna be at, but we still can’t listen to the outside noise.”

On the week leading up to Northwestern and his injuries, “I didn’t practice that much and running the ball was tough. That’s what hurt it the most. It was tough to get out of the pocket and do the things you wanted to do.”

On his health, “I feel a lot better. I’ve been out for two and a half weeks, so I got a lot of rest. I had two bye weeks, I should be alright.”

On Jerminic Smith’s performance in his absence, “Better than me. He did a lot and was making a lot of plays.”