Riverside scares up some radio 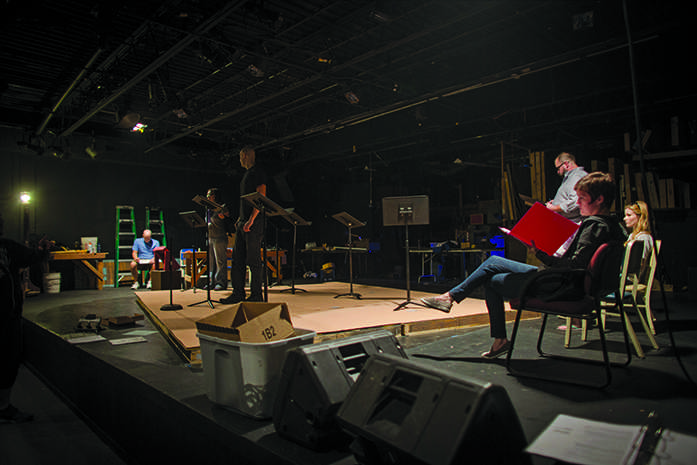 Riverside scares up some radio

Radio may not be a huge American pastime anymore, but Riverside Theater hopes to bring back the idea of staged radio.

It Came From Riverside Theater is a live rendition of staged old-time radio featuring short sketches, commercials, chills, Edgar Allen Poe’s “The Raven”, and a live band. The show will run at 7:30 p.m. Friday and Saturday at Riverside Theater, 213 N. Gilbert St.

“Most of the stuff you’re going to be seeing this year is going to be different from what Riverside has done before,” said Sam Osheroff, the Riverside artistic director. “We wanted to offer something for Halloween, and I wanted to do something in the style of old-time radio and stage, because it is totally different, and fun, and iconic that we’re doing some of the dated materials and that’s fun.”

Riverside didn’t want a blow-by-blow autobiography, Osheroff said, instead aiming to not toe the line of the typical biographical narrative.

“I didn’t want one person sitting up there saying, ‘When I was a kid, this and this happened,’ ” he said. “It has to be performable, has to have a visual and possibly a musical element to it. We wanted to push it closer to performance art, some of it. What we asked people to shy away from were the sincere narrative, the sincere memoir. That’s a good place to start, but we want it more fictionalized, more theatrical, more explosive, more of a visual element. ”

Director Patrick DuLaney said he was greatly inspired by the Sandbox Artist Collective of Seattle.

After collaborating closely with Osheroff, DuLaney was ready to present this new medium to the Iowa City theater community, which challenges the actors with its “very melodramatic, very fun” old-style acting.

“Because it’s a radio show — even though the audience will be watching us — the emphasis is placed on the voice,” Osheroff said. “You use the top of the range, bottom of your range, and everything in between.

“Another thing is it has a sort of time-capsule effect,” Osheroff said. “We’re using commercials from the 1940s, like, ‘Of all the doctors, which cigarette do you smoke, doctor?’ It’s an interesting time capsule in seeing what life was like in the 1940s … It’s a fascinating time and place to look at where we were 70 years ago.”

DuLaney aims to expand this event in the near feature, bringing staged old-style radio to Iowa City regularly.

“I think the title we’re doing is the River Dog Radio Players or the River Dog Series,” DuLaney said. “We’re hoping that however many times a year, usually centered on a holiday, we’ll do an evening of radio plays with a small group of actors. It’s kind of a variety show, there’s some scripts, poetry, and some singing.”

One actor in the production, Robyn Calhoun, said that while difficult, providing the audience with a new take on Halloween is “a little funny, a little eerie, and a little melodramatic.”

“The radio aspect of this show is particularly challenging because, even though the audience will be in the room with us, it has to be played for the listener,” Calhoun said. “That puts a lot of pressure on an actor to bring everything her character needs to convey through her voice.  Body language and facial expressions are tools that must be put away, and that is a difficult — and admittedly scary — prospect.”

DuLaney anticipates the possibilities the night holds: a full Abbott and Costello Haunted House radio hour; with singers belting out That Old Black Magic and a jazz band onstage with the actors.

“The audience should expect to laugh,” DuLaney said. “[They should] expect a great story to be told but expect actual chills here and there. We’re doing a couple scary pieces, but overall, it’s a very pleasant, fun evening. Sit back, relax. We’re closing with Edgar Allen Poe’s ‘The Raven.’ We’re considering asking the audience members to close their eyes and just experience it.”

Visit dailyiowan.com to see a video with the It Came from Riverside Theatre cast and crew.