Protesters voice their displeasure with regents 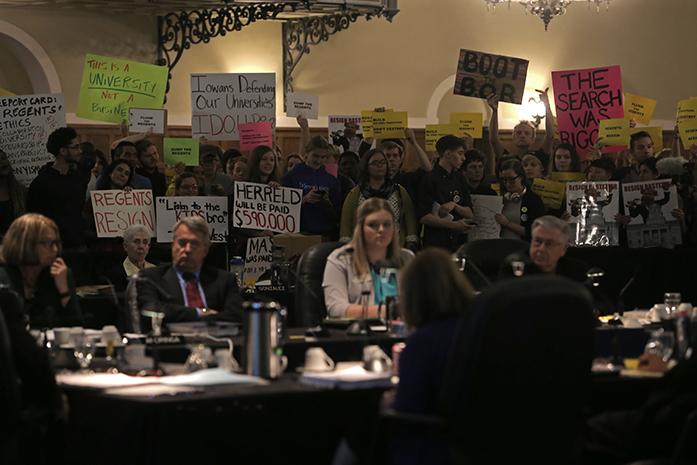 By Austin Petroski and Cindy Garcia

“Hey, hey, ho, ho, the Board of Regents has to go,” was the chant heard echoing throughout an overflowing IMU Main Lounge as the regents looked away.

The rally was organized by a new organization called Iowans Defending Our Universities. Hundreds joined together to voice their displeasure toward the state Board of Regents and its selection of business consultant Bruce Harreld to succeed Sally Mason as University of Iowa president.

The protesters entered the regents’ open session silently as they discussed the TIER efficiency study.

Regent President Bruce Rastetter stopped the session to acknowledge the ever-growing crowd. Participants in the rally gave the regents a petition with more than 1,000 signatures calling on the regents to dismiss Harreld.

The participants surrounded the room with homemade signs held high. Representatives gave the regents a petition and soon afterward erupted in chants calling them to resign.

The petition noted an informal survey by the UI chapter of the American Association of University Professors that found fewer than 3 percent of faculty and five percent of others thought Harreld was qualified. He was chosen over three more conventional candidates from academia.

Brad Pector, a UI undergraduate and organizer of the protest, was one of the first to speak outside prior to entering the meeting.

“Iowa deserves better,” Pector said. “We are calling for the resignation of President Harreld and an enactment of a new selection process — one that is more democratic and inclusive of the university.”

Pector quoted the slogan “going from great to greater”  — used by Harreld and the regents — and said the rhetoric behind that idea is blind.

“We do not collaborate with cronies,” Pector said.

Many UI professors were also involved in the protest.

“The search was so fraudulent,” said UI English Professor Loren Glass. “It made us an embarrassment.”

Teresa Treat, a UI psychology professor and member of the UI Faculty Senate, demanded the resignation of Harreld. She said the presidential search was a sham and waste of money, believing Harreld had been pre-chosen. Criticism erupted previously when emails revealed that he had met with five of the nine regents before the application deadline.

During the outdoor portion of the protest, Treat listed the regents’ official duties they are committed to, asking the protesters if they were abiding by them. She then started an “I vote no” chant of no confidence in the regents.

Landon Storrs, a UI professor and director of undergraduate studies, also spoke to the crowd.

Protesters held signs that proclaimed: “Let go of the status quo. Dump the Regents” and “Our universities are not for sale.”

“Tradition is in grave danger here at the university,” Storrs said. “Students, taxpayers deserve better than this; we demand the members resign or be removed.”

Many of the faculty members were upset at the overall feeling that the UI is being run like a business, accented by the hiring of a businessman to the position of president.

Last week, the American Association of University Professors sent representatives to the UI campus to gather information for a report to determine whether the UI should be placed on a “sanctioned” list due to the presidential search process.

Harreld is set to start his job on Nov. 2.

After chanting for several minutes, the protesters slowly trickled out of the room. The regents gave the event no acknowledgement and returned back to the TIER review session.