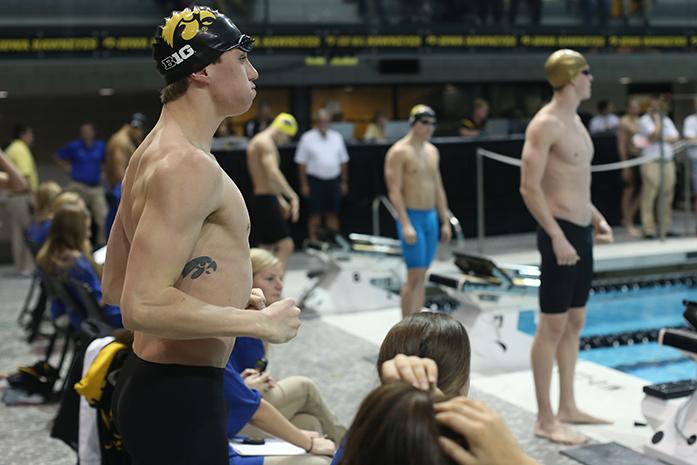 Iowa swimmer Jackson Allen prepares for the 100 yard freestyle at the CWRC during the Hawkeye Invitational on Sunday, Dec. 7, 2014. Allen finished third in the final heat with a time of 44.83. The Iowa men’s team won the meet with a score of 918.5; following in second place was Notre Dame with 918 points. (The Daily Iowan/John Theulen)

There is plenty of potential for men’s swimming freestyle group to score points this season.
By Blake Dowson

The Iowa men’s swimming and diving team (2-0) is off to a good start early in its season, and a particular group of swimmers has a lot to do with it.

NCAA qualifiers Roman Trussov and Jerzy Twarowski won the 100 breast and 200 fly, respectively, against Michigan State last weekend, but the Hawkeye freestylers impressed observers the most against the Spartans.

The Iowa freestylers won seven-of-eight freestyle events, including the relays.

“They’re starting to step it up, and it’s good to see,” head coach Marc Long said. “Those are such important events for the team because that’s where a lot of our relays are based on. The 200, 400, 800 free relay, it’s important that you have a lot of depth there and a lot of speed.”

Iowa certainly does appear to have depth and speed in the freestyle events, earning the top four spots in the 50, 100, and 200 free against Michigan State. Eight Hawkeye swimmers placed in the events.

Freshman Jack Smith, winner of both the 100 and 200 free against Michigan State, is yet to lose a freestyle race this season.

The Stoke-on-Trent, England native also picked up wins in the 50 and 100 free in the Hawkeyes intrasquad meet and picked up a win in the 50 free in Iowa’s season-opener at Illinois-Chicago.

Smith said he knew he had a chance to compete right away at Iowa, but he did not envision this much success so soon.

“I knew that my times converting [from meters] were capable of me doing good things over here,” he said. “My times have been good so far, but I know that I can do way better. I want to keep getting better every day.”

Depth in the freestyle is critical for any team, but it could be the last piece to the puzzle for the Hawkeyes.

With NCAA qualifiers Trussov and Twarowski on the roster, as well as Addison Boschult on the diving board, Iowa has become better rounded this season with the success of its freestylers.

“It’s critical to have a team that’s competitive in the Big Ten to have a stable of freestylers that can swim fast,” Long said. “In training sessions, there’s a nice culture developing with that core group, and they get after it. We put them in challenging situations in practice, and they’re stepping up. It’s a start, and it’s good.

“We have a history in this program, winning the sprint relays in 2012 and having a good group of developing kids like that. We think this group could be a good one, but there’s still a ways to go.”

Smith said he believes there is enough talent in the group of freestylers on the roster to make a splash in the Big Ten and beyond.

After the dominant performances from him and his teammates so far this year, who’s to doubt him?

Senior Jackson Allen, the winner of the 50 free against Michigan State, knew before the season started the talent the freestylers possessed.

Now they are putting it on display, which bodes well for the Hawkeyes in their bid for a Big Ten championship.

“We’ve known for a while the potential that our freestyle group has,” Allen said. “It’s just a matter of stepping up and realizing that potential.”