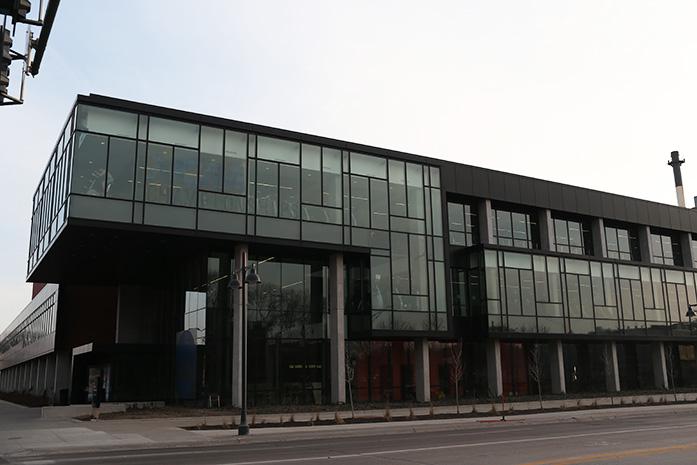 The Campus Recreation and Wellness Center is shown on Sunday, March 22, 2015. The CRWC will be closed from Monday to Sunday due to the men's NCAA Swimming and Diving Championships. (The Daily Iowan; John Theulen)

A new recreational facility could be in the UI’s future, depending on the results from a Recreational Services’ survey.

University of Iowa Recreational Services is looking into possibly renovating outdated facilities, updating equipment, or even constructing a new facility. The department distributed a survey to 5,000 students and 1,500 faculty and staff members to find out which locations they use, which activities people participate in, and how convenient facilities are.

“It’s really an internal planning process so we can prioritize and maintain our facilities,” said JT Timmons, the director of Rec Services. “For example, the Field House was built in 1927. It’s aging, so we have to determine a way to keep it up and what’s the best course of action.”

Some of the questions related to a potential new facility and where respondents think it should be located. However, Timmons said a new facility is far from a serious plan. Instead, the survey will gauge whether there is a need for one at the UI.

“It’s definitely a possibility. We’re optimistic about growth in facilities, but we’re also realistic,” Timmons said. “There’s the financial piece. If we don’t have the money we won’t do it.”

The last time Rec Services administered a similar survey, the feedback led to the construction of the Rec Center in 2010.

“I think now a lot of people come the UI for the [Rec Center]. It’s a recruiting tool,” Senior Associate Director of Rec Services Michelle Harder said. “We’re basically trying to assess what the students, faculty, staff, and community wants, and evaluate our facility and program needs.”

The results of the survey may show that a new facility is unnecessary.

“Right now we’re just in planning, just seeing what’s out there, and what people want,” Harder said. “There has been some talk that the [Rec Center] gets a lot of use and if there would be benefit to go to the south and do a phase two of the [Rec Center].

Harder said Rec Services will know the survey results in a few months, which is when they will begin discussing the possibility of updating existing or building new facilities.

“There’s nothing concrete at this point. We haven’t talked about funding or timeframe or anything,” she said. “We’re just getting the word out and seeing if people want it.”

UI freshman Amelia Likeum, one of the 5,000 students who received the survey, occasionally uses the treadmill at the Rec Center in the evenings.

“I don’t think a new facility is necessary, since we already have a few,” she said. “It’s usually not too busy when I go.”