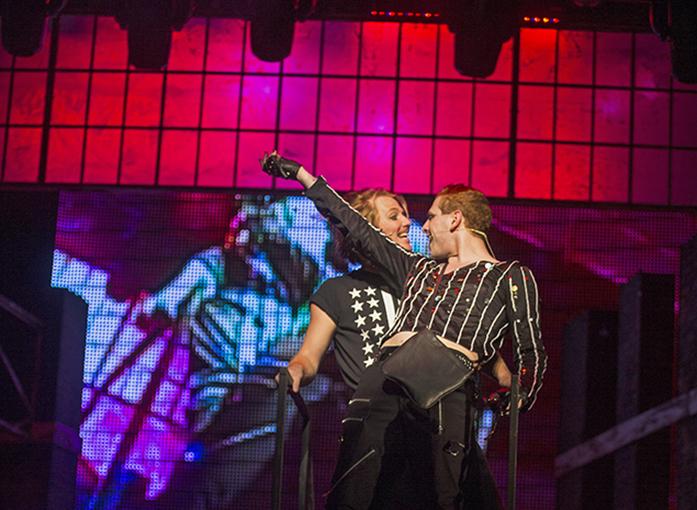 Forget yellow brick roads and star-crossed lovers. There’s only a gritty city, ass-kicking attitude, and a throat-tearing score in this theater.

American Idiot, a theatrical adaption of the Green Day Grammy-winning album, is rocking the University of Iowa Theater Department.

Performances will begin at 8 p.m. Friday in the Theater Building’s Mabie Theater, kicking off this year’s Mainstage season. The show will run through Oct. 25.

After opening at the University of Calfornia-Berkeley in 2009, American Idiot has been performed on and off Broadway.

“We had waited for the rights to come available for several years,” said John Cameron, a UI theater professor and the director. “Bryon Winn, director of theater, and I are both big Green Day fans. We thought that it would be accessible to our students.”

Many students grew up with the album. After its 2004 release, it was hard to avoid “Boulevard of Broken Dreams” or the title track. Dealing with the fear of losing yourself politically and socially, adolescent listeners could relate.

“We tried to get into that mindset of what that soundtrack means for a whole generation of my age, what does it mean today,” said UI junior Skyler Matthias (Will).

The musical revolves around Johnny and his two friends, Will and Tunny. Just graduated from high school, they are desperate to escape their stifling small town.

Johnny and Tunny leave for the big city, while Will chooses to stay behind with his newly pregnant girlfriend.

Check out a slideshow here 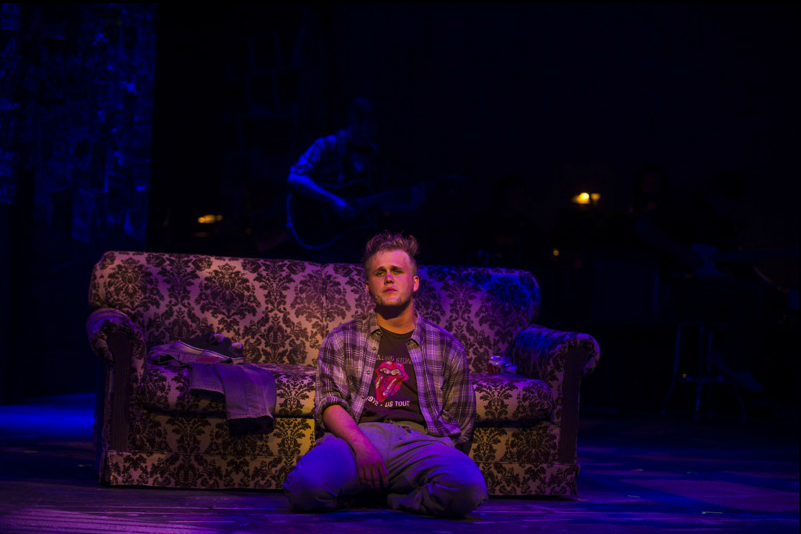 Adulthood does not live up to their dreams, though, as they grapple with depression, drug addiction, and the ongoing Iraq War. Characters rage against their life choices and political landscape, belting punk-rock songs.

“The score is straight-up rock music for almost the entire duration of the play, so I needed to hear that possible cast members could sustain a high energy and big sound from their voices,” said UI senior and musical director Frankie Rose.

The vocal demands were daunting to even theater veterans.

“My initial reaction was, ‘Do we have the voices for this?’ ” said UI senior Christopher Ray Matheson (St. Jimmy). “But once you get in rehearsals and start singing it more, you get to know the voice the musical needs.”

The cast members had only six weeks to hone their vocal power.

“Keeping the singers energetic and supported with their punk singing was definitely a challenge; quite a few members of the cast are classically trained, and it was difficult to get them to step out of their comfort zone and try a more messy style of singing,” Rose said.

Staging American Idiot has stressed stepping out of comfort zones. It wasn’t enough for cast members to dye their hair, don frayed clothes, and retrain their vocal chords; they had to embrace punk culture. Born from the rebellion against political and social norms, punk rock’s history and attitude is not easily adopted.

“Generally, I’m pretty joyful, but I have to turn into someone who’s not necessarily happy all the time, someone wo’s upset with the establishment,” said senior Niki Charisse Franco, who plays Johnny’s love interest, Whatshername. “It’s not me, but it has to be me; I have to be that character.”

Character development was a challenge for the director and cast. The script offers little dialogue outside of the music, so actors used personal connections to give the characters some dimension.

“I’ve had to think back to my immature days,” said Aaron Brewer, playing show lead Johnny. “I can relate to Johnny; I’ve made my mistakes, gotten in the wrong crowds.”

Despite any limitations, Cameron understood the potential that actors had to develop their roles.

“Having someone who knows the actors’ capabilities of transforming a show is great,” Matthias said. “As an actor, I really believe you can have a blank set and still make a script come alive.”

Not quite blank, American Idiot’s story is contained in a graffiti-splattered warehouse.

“It is raw, open, a very lived-in space, and it has its surprises,” said Scenic Director Eric Stone. “If you spend more time looking at it, you start seeing more of the details — there are more than 500 punk-concert posters on the walls.”

The subtle yet meticulous details of the set contrast the theatricality of the performance. Production members literally form a sidewalk under an actor’s feet as he walks down a raised ramp.

“It’s all clear, open,” Rose said. “We’re not hiding anything. It helps encourage a sense of imagination.”

The 20-foot-by-30-foot LED wall and 90-plus lighting cues also immerse the audience.

In that warehouse, they will experience Johnny’s struggle to hold onto Whatshername and himself, under the destructive influence of St. Jimmy. Viewers will travel to Afghanistan with Tunny as he enlists, then return to Will, left behind in suburbia.

It is a depiction of the hard — and heartbreaking — choices made as young adults explore freedom and fight for their identities.

“It’s very honest; we all don’t want to be American idiots,” Matthias said. “We battle that, and it comes through in the music.”

Fans of classical theater may be wary of the play’s content, but as the university has displayed before, it is not afraid to stage a modern play.

“I think the university’s not known for doing shows that the public always wants to do,” Matthias said. “That’s the privilege of being at the university; we don’t rely purely on ticket sales. We don’t have to do Grease to make money; we can do a new, cool play.”

American Idiot may have been a bold choice, but the public’s response has been strong, with tickets for opening night selling quickly.