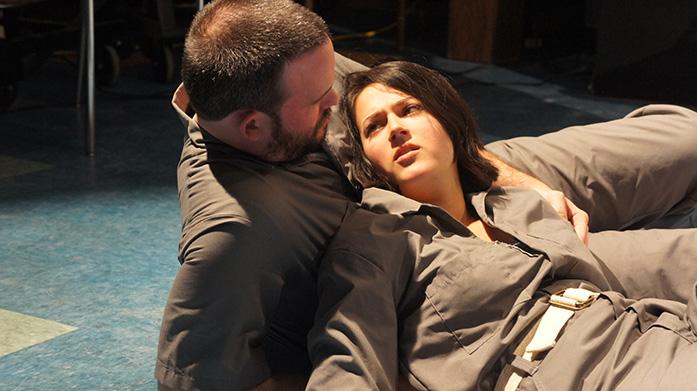 Julia (Alexis Russell) looks on at her fellow actor as they depict a scene between the two characters Winston and Julia from "George Orwell's 1984" at Public Space One on Tuesday, October 13, 2015. The first final performance of this play will begin on the 16th. (The Daily Iowan/Rebecca Bright)

Six people in matching clothing stand in a line. They are identical in garb, nothing distinct about any. With a tyrannical government, all individuality has been crushed for these characters.

1984, a novel by George Orwell and adapted by playwright Michael Gene Sullivan, will be performed 7:30 p.m. this weekend and next at Public Space One, 120 N. Dubuque St.

This play will be director Gavin Conkling’s debut at Dreamwell Theater.

“I’ve wanted to direct this play for about 10 years,” Conkling said. “I just couldn’t find an adaption I liked.”

Until he discovered Sullivan’s adaption, that is. In this version, the beginning of the book is told entirely through flashbacks; the ending section of the novel makes up the present action of the play.

Four of the six characters are ruthless party members who interrogate Winston, the main character. The four actors also perform as other characters.

“I like that I get to be different characters and change my mannerisms and my voice,” said Eric Teeter, who plays Fourth Party Member, an old man, and a child, among others.

The party members have worked hard to persuade the audience of their brutality. Valerie Davine Bills, Third Party Member, is taking the cruelty of her character to a whole new level through fight classes.

Neither the book nor the play has anything to do with 1984. Orwell wrote the book in 1947 and originally titled it 1948. He was told it would not sell set so near in the future, so he switched the last two numbers.

Much like Orwell’s other works, 1984 criticizes politics and, more specifically, totalitarianism; Winston lives in a dystopia where everything is controlled by Big Brother, the party leader.

The expressions of the actors will signify their domination by Big Brother.

“I love when novels come to the stage,” said Duane Larson, who plays Winston. “I read 1984, so it’s satisfying to participate in it.”

This play appeals to audiences because its themes are still prevalent, Conkling said. Almost 70 years have gone by while the possibility of the tyranny is still exists.

“I hate to say that it’s been my lifelong dream [to direct this play], but is has been my dream for about the past 10 years,” Conkling said.

By bringing 1984 to the stage, audiences will get to visualize the consequences of a totalitarian government and grasp the message. If this were a lecture, almost no one would care about the situation, Larson said.

“I want the audience to know this is happening in different parts of the world,” Davine Bills said. “I see 1984 everywhere now.”