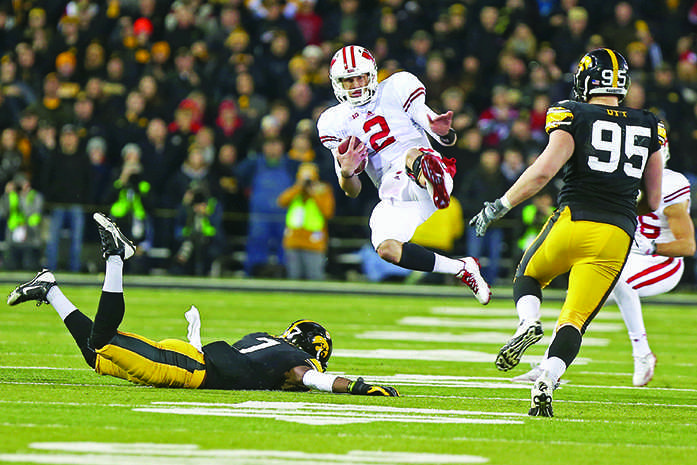 Wisconsin quarterback Joel Stave is taken out by Iowa defensive back Sean Draper in Kinnick Stadium on Saturday, Nov. 22, 2014. The Badgers defeated the Hawkeyes 26-24 to keep the Heartland trophy. (The Daily Iowan/John Theulen)

The Iowa football team can put itself in a great position in the Big Ten West with a win over No. 19 Wisconsin on Saturday.

A season ago, the Iowa football team’s biggest shots at the Big Ten West championship didn’t come until the final two games of the regular season against Wisconsin and Nebraska.

Of course, the Hawkeyes (4-0) fell short by a combined 5 points in those games and did not win the West. This year, however, things are different — the Hawkeyes have the chance to put themselves in the driver’s seat by beating No. 19 Wisconsin, which sits at 3-1 on the year.

“I think everybody understands it’s an important game,” center Austin Blythe said. “You can’t win championships without winning one at a time.”

Although Blythe may come off as modest, don’t underestimate the importance of this game — set to kick off at 11 a.m. Saturday in Camp Randall Stadium —  coming early in the season.

The last time the Hawkeyes played the Badgers in their Big Ten opener was in 2007. Wisconsin won 17-13. Neither the Hawkeyes nor the Badgers finished great that year, going 6-6 and 9-4, respectively. Yes, it was a down year for both, which doesn’t make for a great comparison tool.

But a look at the Big Ten since 2011, when the league championship game was implemented, shows getting off on the wrong foot can be crippling. Wisconsin, Michigan State, and Ohio State are the only schools to win a Big Ten Championship game. The 2012 Badgers are the only team to lose their first conference game of the season and be successful in Indianapolis.

But that 2012 Wisconsin team comes with a caveat. Ohio State was ineligible for postseason play that year because of NCAA sanctions, and the Badgers lost five games in the regular season. Ohio State went undefeated that season, and we never got to see what wouldhave happened in the title game.

“It’s a game we need to get under our belt that we’ve been working toward this off-season,” safety Jordan Lomax said. “We’ve been preparing well this week; if we win this game, it’ll continue to improve our confidence level and let us continue to get better.”

As Lomax said, this game has been circled on Iowa’s calendar since last season. The Hawkeyes lost, 26-24, to the Badgers last season in Kinnick. After managing only a field goal in the first half, quarterback Jake Rudock had perhaps his best half of football in a Hawkeye uniform after the break.

He led an offense that outscored Wisconsin 21-10, and the Iowa defense came within one play of getting off the field and giving Rudock the ball with roughly two minutes left.

Although Wisconsin’s defense isn’t exactly the same as last season, the Hawkeyes hope last year’s experience helps them win this conference game and show the rest of the Big Ten they’re for real.

If they are for real, beating Wisconsin is as big of a statement as they can make.

“In the first half, offensively, we weren’t able to do a whole lot,” VandeBerg said. “Second-half adjustments, we came out and played really well. We know what we were capable of, but we need to do that for 60 minutes.

“Looking back on that tape and seeing all the plays we left out on the field, now we know what we need to do going into this game.”