Field hockey tries to bounce back 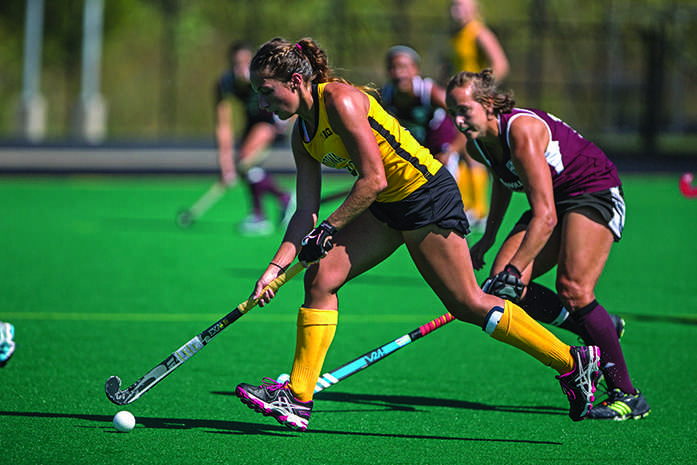 Hawkeye senior Isabella Licciardello moves downfield during a match against Missouri State on Sunday, Sept. 20, 2015. Licciardello scored her first goal of the season in the win. The Hawkeyes defeated Missouri State 2-0. (The Daily Iowan/Sergio Flores)

After its 3-1 loss to Indiana on Sept. 25, the Iowa field-hockey team dropped two spots to No. 18 in the coaches’ poll.

This is the first time since the 2014 season that the Hawkeyes have been this low in the rankings.

Iowa head coach Lisa Cellucci was rather dismissive about the poll.

“I think the coaches’ rankings are … I don’t want to say a popularity contest, but really, it’s just people who see you have a great win, so they give you a couple votes,” she said. “We don’t pay too much attention to that, and we tell the girls that we don’t want to put too much stock in it.

“It doesn’t concern me one way or the other. On any given day, we can compete with anybody in the country.”

The messy loss to the Hoosiers knocked the team down from its previous rank, 16. Indiana outshot the Hawkeyes, 17-11, and earned 7 penalty corners.

Junior Chandler Ackers said the Hawkeyes didn’t show up to play in Bloomington, which allowed the non-ranked Hoosiers to take advantage.

“It was obviously a tough loss, and we didn’t come out to play how we wanted to,” Ackers said. “I think it was a great learning experience to know that we always have to come out no matter the team with a certain amount of urgency. We’re working on it.”

While the loss was the Hawks’ first in the conference, their problems against the Hoosiers were similar to issues they faced early in the season.

The biggest problem, Cellucci said, is that the players are not executing their roles. She believes the Hawkeyes put too much pressure on themselves to perform, which leads to inconsistency, losses, and minor errors.

Fixing that may be tough, though, considering that a large number of Hawks are playing positions they’re not accustomed to because the roster lacks depth.

The second-year head coach hopes that the team can come together and figure things out.

Which would be good, to say the least, because from here on out, everything matters for the Hawks. The team has seven matches left, but only one nonconference opponent to face. Of those six programs, No. 8 Maryland, No. 14 Northwestern, and No. 16 Michigan are ranked higher than Iowa.

“Everyone has to execute her role, every day; it’s just not an option,” Celluci said. “We have to show up, we all have to be on the same page, we have to outwork our opponents, and we have to attack. Those are the biggest pieces.”

Improving will be a work in progress for the Hawkeyes, but senior Isabella Licciardello has confidence in her teammates and what they can do in the upcoming weeks.

The Hawks may be 18th, but she doesn’t want skeptics to knock them out the picture just yet.

“I think that this team definitely has a lot in it,” she said. “This season still has a bright future for us, and we’re definitely not done.”