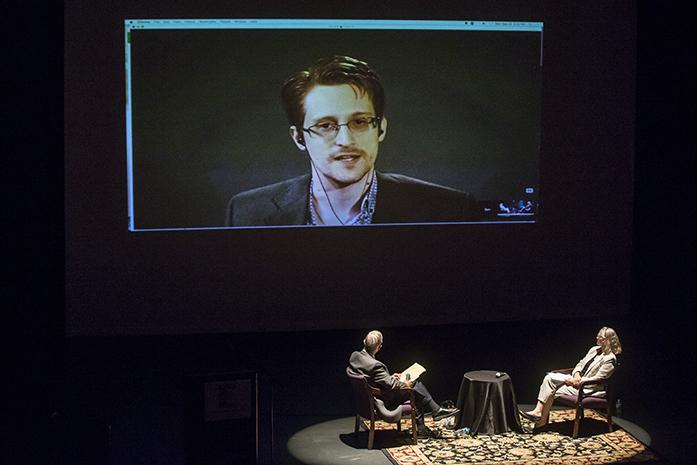 Former member of the CIA, Edward Snowden joined Ray McGovern and Coleen Rowley during a lecture about government transparency and the fourth amendment. (The Daily Iowan/Sergio Flores)

Edward Snowden popped up in Iowa City from nearly 5,000 miles away.
Snowden, appearing by web cam, was greeted Monday evening with a standing ovation at a full Englert Theater.

Snowden appeared with Coleen Rowley and Ray McGovern in a University of Iowa Lecture Committee event largely focused on government surveillance and secrecy.

All three speakers have some degree of experience with the government.

Rowley, a graduate of the University of Iowa College of Law, became a whistleblower after the 9/11 attacks, ending her tenure at the FBI. McGovern also chose to turn away from his CIA roots to pursue political advocacy.

“People often ask — is she a hero or a heroine? No, heroes and heroines are too easily dismissed. She’s a patriot. Just as Edward Snowden,” McGovern said, speaking about Rowley. His remark was met with applause from the audience.

The most anticipated moment of the night was Snowden’s appearance.

Snowden said it was may be easy to say nothing has changed since his exposure of the NSA’s surveillance on American citizens, but he believes there has in fact been meaningful change.

He pointed out that the Supreme Court has ruled against surveillance programs that have been in place for decades, and the United Nations has declared privacy a human right.

One audience member raised concerns over access to public records in relation to the recent appointment of Bruce Harreld as UI president.

“It raises a central point, which is that when you think about the lessons of 2015, they’re not about surveillance. They’re about democracy,” Snowden said. “The bottom line is that secret policy is almost always bad policy.”

He noted that public officials should explain and be held accountable for “secret policies.”

“One more thing I will say as a technologist, who has worked with forensics and who has worked for the NSA — emails don’t become unrecoverable by accident,” he said.

Rowley and McGovern hosted a press conference earlier in the day before Snowden’s appearance.

Rowley focused on the 9/11 attacks and failures of government agencies to effectively manage and share information. She spoke about regaining a higher moral ground, lost through torture and mass surveillance.

She noted that the U.S. foreign policy has backfired severely.

“We’re seeing the results of this with the refugees drowning as well as higher levels of terrorism than ever before, 6,000 percent increase since 9/11, in the hope that we can turn this around,” she said. “I think the answers are democracy and rule of law.”

McGovern focused on the Constitution, specifically the Fourth and Fifth Amendments, being violated.

“What Coleen and I are upset about, quite frankly, is the danger to our civil liberties and the fact that the Fourth Amendment of the Constitution of the United States has been trashed and nobody seems to give a darn about that,” he said.

Snowden said his problems with obtaining asylum and impending threat of being arrested by the United States is something he doesn’t think about anymore.