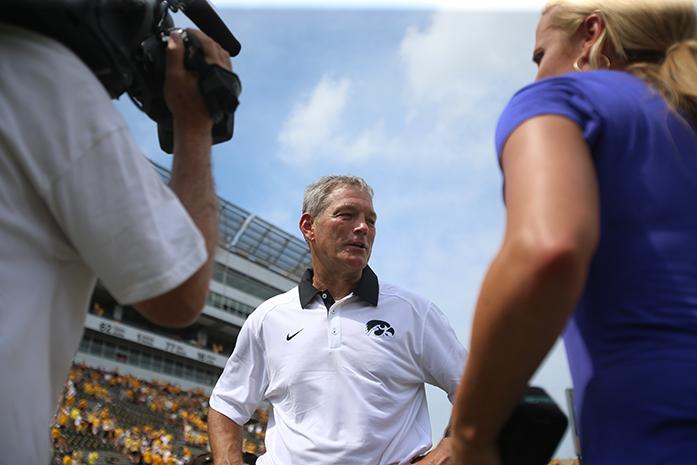 Iowa head coach Kirk Ferentz gets interviewed after the Iowa-Illinois State game in Kinnick on Saturday, Sept. 5, 2015. The Hawkeyes defeated the Redbirds, 31-14. (The Daily Iowan/Margaret Kispert)

Iowa head football coach Kirk Ferentz speaks with the media each Tuesday during the football season. Every week, The Daily Iowan‘s Pregame Staff will post highlights and interesting quotes and lines from Ferentz’s press conference.

First word(s): OK, welcome.
“I think we’re seeing a growth right now, and I think the most important thing is the leadership we’ve seen in the last eight weeks or so.”
Captains are the same: Ott, Lomax, Blythe, Beathard.
Injury wise, “a couple guys are limited.” Ferentz says it’s not out of the question for those guys to play Saturday in Madison.
“I think we have a good football team right now, and I think we’ll learn a lot in the next eight games, nine weeks.”
On Jordan Canzeri: The first thing that comes to Ferentz’s mind is his pass blocking. Says he’s not sure if a guy can have a quiet four touchdowns, but thinks that was the case for him against North Texas.
Ferentz says LeShun Daniels, Jr. looked better in practice today. He’s cleared, but not up to what he can be yet. Drew Ott is in the same situation. Thinks his team is moving in the right direction.
Ferentz says Wisconsin’s offense isn’t “a calculus equation.” Says they know how to do things well and know the right time to do them.
“It’s going to be a tough, hard-nosed, physical football football game.”
Ferentz emphasizes that one game doesn’t define the Big Ten season, but you have to do well against Wisconsin do have a shot at the Big Ten.
Ferentz says Miles Taylor, Jake Duzey, and Greg Mabin are progressing.
We have a “Bug’s Life” reference. Says former offensive lineman Eric Steinbach was nicknamed “Cricket” because he was skinny.
On Ben Niemann: “When that position doesn’t play well, and when it does play well, it’s the quiet-man position.”
On Chad Greenway’s 91-yard interception return: Ferentz says he didn’t see it, much to his chagrin, but is proud of Greenway.
Says Jonathan Babineaux’s mom called and left a happy voicemail this week. Ferentz says he likes those and they’re very welcome.
On Jordan Canzeri’s carries: “If one guy carries the load that’s fine … it takes a tough-minded guy, Jordan’s certainly capable of that.”
“If the roof should cave in this week, if all hell breaks loose, we’re playing next week, too.”
Ferentz says he’s glad Iowa and Wisconsin are back to playing each other after a few years off due to Nebraska’s entrance into the Big Ten, which opened the Legends-Leaders era.
Says Akrum Wadley was “putting money in” the proverbial bank as opposed to taking it out with his play against North Texas.