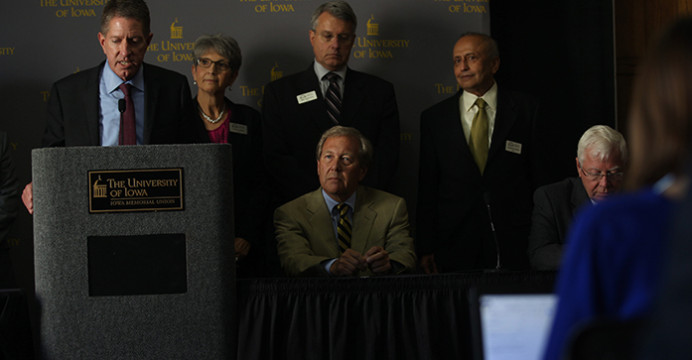 Dissent over the appointment of Bruce Harreld has grown.

The University of Iowa College of Liberal Arts and Science Faculty Assembly announced Monday they had unanimously approved a motion of no confidence in the state Board of Regents.

The assembly called for the regents to resign or be dismissed by Gov. Terry Branstad, going a step further than past votes of no confidence by other governance groups on campus.

“The faculty are speaking with a collective voice,” said Faculty Assembly President Russ Ganim. “They are providing a unified view based on thoughtful deliberation of circumstances.”

Both the UI and the regents’ office declined to comment.

The regents appointed Harreld — a business consultant with corporate leadership experience but none in academic administration — to replace Sally Mason as UI president earlier this month. Harreld has also taught at Harvard Business School.

With the move, they hope to shift the status quo at the UI. The appointment has drawn sharp criticism by faculty, staff, and student leaders on campus.

Supporters say there’s a need for new revenue streams and a fresh style of leadership in a time of plummeting state support and skyrocketing tuition.

The Faculty Assembly came during a closed session meeting on Sept. 23, during which the members also censured Harreld because of concerns over his résumé.

The liberal-arts school is the UI’s largest college, with roughly 700 faculty members. Around 70 representatives of the departments met for the vote.

“There are clearly issues that need to be resolved, and [the administration] has not opened the lines of communication,” Ganim said.

Gov. Terry Branstad is responsible for appointing the regents; the Iowa Senate must confirm them.

“Gov. Branstad has confidence in the effective and fair selection process conducted by the Board of Regents,” said Ben Hammes, the communications director in the Governor’s Office. “He appreciates and respects the invaluable service of the Board of Regents and he believes that moving the UI forward is important and that Mr. Harreld should be given the opportunity to succeed.”

According to Iowa Code, the governor “may remove any member of the board for malfeasance in office, or for any cause which would render the member ineligible for appointment or incapable or unfit to discharge” with the approval of the Iowa Senate while in session.

“It’s very difficult to say [whether regents will be removed], but we do think that the issue needs to be presented and the faculty voice needs to be heard,” Ganim said.

Faculty leaders are hopeful that other groups will follow suit to promote a change.

“At this point I don’t know, but it’s definitely within the realm of possibility,” Ganim said.

McMurray also worries the shift in the presidency is indicative of a focus that isn’t on education.

“Having a great university is something everybody should agree is important,” he said. “I hope we’re starting to make people throughout the state realize these blatant political decisions are affecting a great treasure in the state of Iowa.”