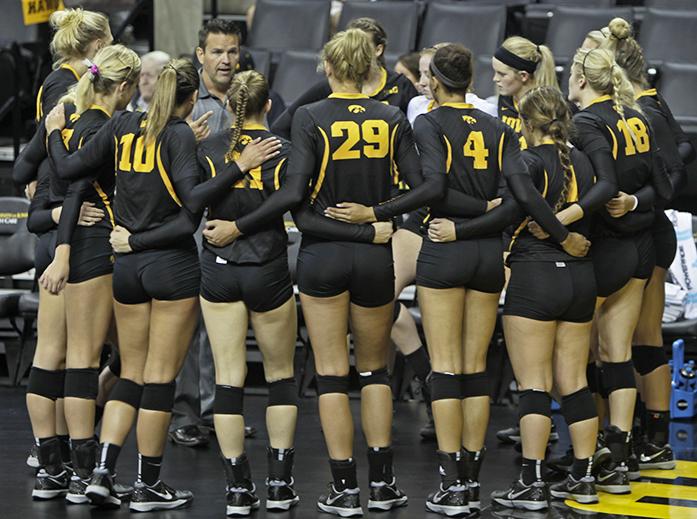 The Hawkeyes were swept by the Huskers for the second time in four days.

The Hawkeye volleyball team, playing its second match against No. 4 Nebraska in four days on Sept. 26, might be excused in bidding good riddance to the Cornhuskers for this season.

“We just didn’t quite capture it tonight,” head coach Bond Shymansky said in a media release. “That’s on me as a coach. We are still learning and figuring it out. You come on the road in the Big Ten, and you have to bring so much more intensity and teamwork as a whole unit. We are just going to have to be sharper.”

The Hawkeyes relied heavily on somewhat sloppy play from Nebraska in the conference opener last week, particularly early in the match, so the Cornhuskers were quick to make it clear that that would not be the case the second time around.

Nebraska collectively logged a .667 in the opening set and had 14 kills without a single attack error. Furthermore, 5 blocks in the set prevented the Iowa offense from punching back, and a 13-1 run for Nebraska helped it cruise to a 25-10 victory, Iowa’s widest margin of defeat this season.

“They started blocking us a lot early,” Shymansky said. “When you get blocked as a hitter, it makes you think a lot. You don’t want to be in thinking mode, you just want to be in doing mode.”

The Hawkeyes showed again, however, that they are neither intimidated nor as overwhelmed as they have been in the past.

After falling behind in the second set 17-11, Iowa put together a 5-1 run to draw to within 2, 18-16. The Hawkeyes had fought back to stay competitive but were unable to close the gap and claim a lead. They ultimately dropped the set, 25-21.

It was a similar story in the third set. Midway through, the Hawkeyes were in a 16-8 hole. Once again they clawed back to cut the deficit to 16-13, but they could never overtake the talented Cornhuskers. Nebraska closed the set and the match, 25-18.

While the Huskers tightened up their sloppiness from the conference opener, the Hawkeyes took a step backwards. The team hit .077 on the night, and the team-high for kills was Lauren Brobst with only 8. Mikaela Gunderson had 7 kills on a .500 percentage, and Jess Janota finished with 6.

Loxley Keala had 25 assists as well as a team-high 4 blocks, including a career-high 2 solo blocks.

Nebraska had 10 blocks in the match, compared with Iowa’s 6. Shymansky will likely seek to improve that number when his team gets back into action this coming weekend.

Things don’t get much easier — the Hawkeyes will face No. 12 Ohio State on Friday, and No. 1 Penn State on Saturday, both on the road.