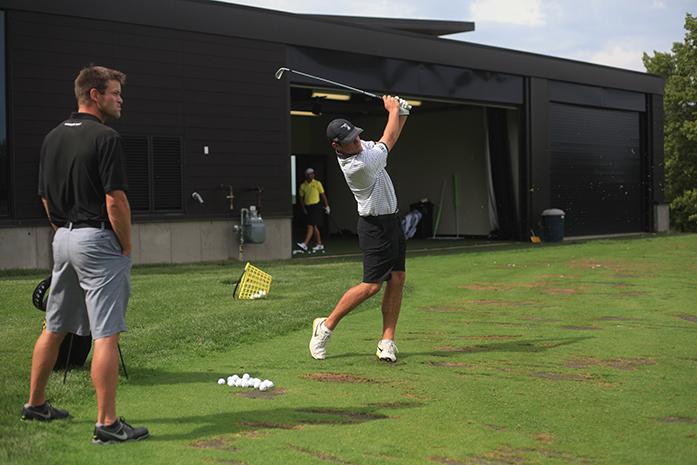 Iowa golfer Jack Homgern practices his swing during practice at Finkbine on Thursday, Sept. 17, 2015. Each golfer has their own person swing that's different from any other one golfer's swing. (The Daily Iowan/Margaret Kispert)

Hawkeyes ace the test at the Golfweek Conference Challenge .

The Hawkeye men’s golf team went low at the Golfweek Conference Challenge at Spirit Hollow Golf Course (Burlington), winning the tournament by a collective score of 843 (minus-22).

Junior Raymond Knoll led the team, shooting 66 (minus-6), 67, and 72 for each round in the three-day tournament, tying him for first place with Jeremy Gandon of Kansas State.

“Winning is something that doesn’t happen very often in our sport,” said head coach Tyler Stith in a release. “These kinds of moments are really special. The guys have put in a lot of work in the early portion of the season, and to win in Iowa in front of so many of the fans that support us is very cool.”

The Hawkeyes broke a dry streak this past weekend. The last time the Hawkeyes won a tournament was in the spring of 2014 at the Boilermaker Invitational. This is also Stith’s first win as head coach of the Iowa men’s golf team.

Along with helping to bring home a win, Knoll scored his first college tournament victory.

“This is something that Ray and I have talked about since he got back from the summer,” Stith said in the release. “This has been a goal of his for a while. He has been close many times, but today he got it done, and I’m really proud of him, not only for his performance this week but for all the work he has done this first part of the season.”

Knoll has been playing very well since the start of the season and was in contention for a win at the Gopher Invitational but was finally able to pull through in the Golfweek Challenge.

While Knoll placed tied for first, the rest of the team contributed a significant amount.

“They were put themselves in a position to win,” Stith said. “Three of our guys entered the final round in the top six, which is really strong, and it’s impressive. It was a collective team effort this week and a great team victory.”

Senior Nate Yankovich and junior Carson Schaake also played well, both finishing in the top 10 with Yankovich shooting 73, 66, and 70, tying him for fifth place. Schaake shot 73, 66, and 71, placing him at tied for seventh.

This tournament was a milestone for Knoll, and all his practice and time spent on the course has led him to achieve his goal.

“It feels really good to finally get my first win,” he said in a statement. “I have put in a lot of work to get to this moment. Coming into this year, I had a different mentality, and I am playing with a lot more confidence. Knowing that all the hard work is finally paying off is really nice.”