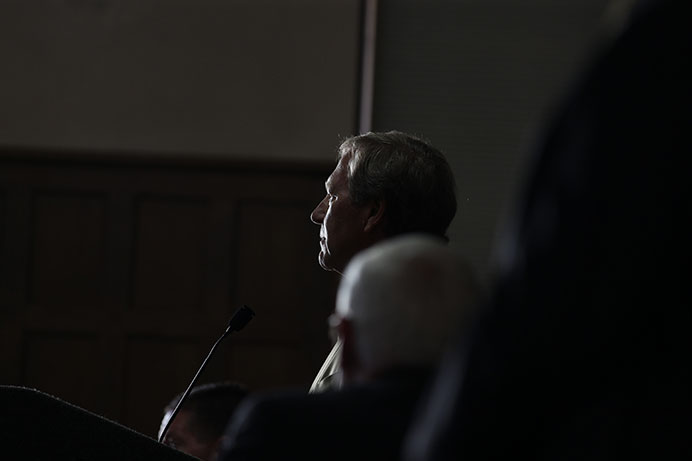 Yet another University of Iowa organization has stepped forward to voice its distaste for the recent hiring of Bruce Harreld as the next UI president.

But this time, the focuses shifted from the state Board of Regents to Harreld himself.

The UI Faculty Assembly from the College of Liberal Arts and Sciences moved a censure at its closed session Wednesday, citing Harreld’s “failure of professional ethics” as the basis for the action.

“I think the motion was about making sure that the basic issues of right and wrong don’t get lost in all of this,” said Bob McMurray, a member of the Faculty Assembly.

A censure is known as a formal reprimand; it doesn’t ask a governing body to pursue a specific action. Famous censures include the rebuking of Rep. Joe Wilson after shouting, “You lie” during a speech by President Obama in 2009 and a censure of then-Sen. Joseph McCarthy in the 1950s for his famous witch-hunt of suspected communists.

The motion cites two pieces of Harreld’s résumé as the foundation for the censure. During the hiring process, he claimed the position of managing principal of a consulting company in Avon, Colorado. The company does not exist. Harreld later rationalized the misstep, saying he was confusing it with a company he used to work for and the place he resides.  Harreld’s résumé also failed to cite coauthors for nine of 12 publications he worked on, the statement says.

The faculty assembly is composed of representatives from all departments in the liberal-arts school. The assembly is led by Russell Ganim, the director of the Division of World Languages.

McMurray said the misrepresentation on Harreld’s résumé was likely a result of “negligence, not caring, or willful disregard for honesty.”

McMurray, who voted for the censure, said there was “a lot of unanimity around this decision.”

“This motion was really kind of an obvious one,” he said. “Let’s call incoming President Harreld out for something even he admitted was wrong.”

As members of both academia and the community, the faculty felt compelled to express their concern for the university’s moral and ethical principles.

“Today’s action was a reminder that values like honesty, which scholars hold very dear, are very important when our university is treated in a political scene,” McMurray said.

The university and the regents, along with Gov. Terry Branstad, have been criticized for politicizing the board and the UI, which are expected to be nonpartisan entities. Regent President Bruce Rastetter, also a Republican donor, has stood behind the choice.

And earlier this month, the UI chapter of the American Association of University Professors released a statement saying “only a preconceived determination by the regents to appoint Mr. Harreld regardless of campus reactions to him can explain his hiring.”

Harreld is scheduled to take over as the UI president in November. Though the community has felt tension since his appointment earlier this month over three more traditional, academic candidates, the assembly maintains its decision was not meant to further that strain.

“It’s different than refusing to work with him or a vote of no confidence, and those could maybe be coming, but it is about making sure members of the university community behave honestly,” McMurray said.

“Even when it’s uncomfortable, it’s our duty.”