The shape of the game 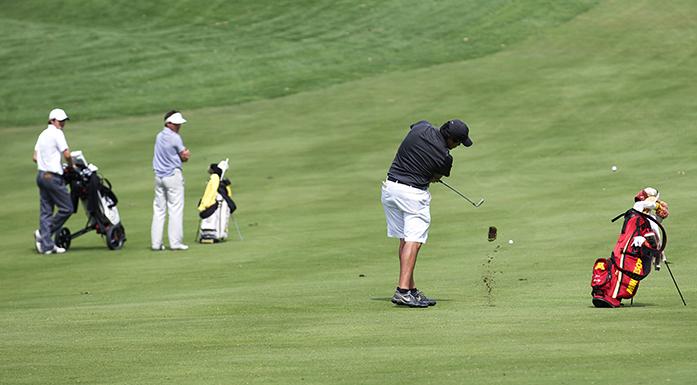 Minnesota golfer Jose Mendez hits a divitt out of the groud during the Hawkeye-Great River Entertainment Invitational on Saturday, April 28, 2015. Iowa State won the meet, and Iowa came in second. (The Daily Iowan/John Theulen)

The game of golf isn’t as easy as it seems, and it doesn’t seem easy.

Along with learning how to swing the clubs, the golfer must learn how to control the golf ball, which is often called shaping a shot.

In golf, there are three terms used for the flight path of the golf ball: straight, fade, and draw.

When shaping a shot, the golfer assesses his options depending on the hole and the factors that are at play on that in particular hole, such as the shape of the hole and wind speed.

“If there’s water up the right side, and I want to take that out of play, then I’ll hit a cut,” Hawkeye junior Raymond Knoll said. “You start it off left, and you know it’s just going cut towards the middle of the green as opposed to hitting a big draw and starting it over the water, because if you start it over the water and it doesn’t draw, then it’s going in the water, and no one wants that.”

Typically, players only shape shots when they have to, and they normally try to hit the ball on relatively straight.

But every player has a unique ball flight, which usually forms naturally. Some players play a draw, others play a fade.

“I’m a natural cutter of the golf ball,” said Hawk senior Nate Yanchovich. “I have to work harder if I want to work the ball right to left. If I just take a normal swing with the swing work that I’ve done over the past few years and even when I was younger, the ball just tends to go left to right.”

Although Yanchovich naturally plays a cut shot, which is another term for a fade, he is still able to play a draw the ball when he has to.

Iowa junior Carson Schaake has worked on his game so that he could do something similar to Yanchovich but with a cut instead of his natural draw.

“I hit cut drivers, it’s one of my go-to shots that I feel comfortable with,” he said. “It’s a shot that you can trust and know.”

In the end, the game is about consistency, and that is what led Schaake to tie for first in last year’s Big Ten Championship.

“Hole 18, probably most difficult hole we will play ever in college golf,” Schaake said. “A lot of guys don’t hit driver, and [Illinois golfer] Nick Hardy, who I was tied with going into that hit an iron off the tee, and I just hit a cut driver just because I knew where the ball was going.”