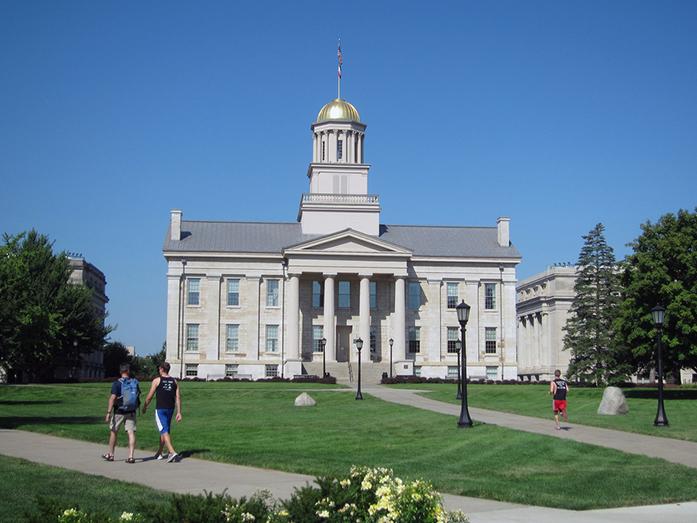 Robillard described how to keep graduate students enrolled at the UI.

“What we need to do to keep graduate students in state is give them tax credit,” he said. “It costs nothing to the state. Nothing, not a penny.”

Robillard also talked about incoming UI President Bruce Harreld. The controversial selection of the business consultant sparked no-confidence votes in the state Board of Regents by UISG and GPSG.

“If you want my opinion, [Bruce Harrald] is the right fit for the university,” Robillard said. “He will be successful as long as he has our support.”

“Although there has been some controversy on the decision process to select President Harreld, we look forward to working with President Harreld to make the university the best it can be,” Schoenfeld said.

Johnson, a University of Northern Iowa sophomore, also spoke at the meeting.

At the last regents’ meeting, she voted against a tuition freeze for the UI. The initial plan was to raise tuition by $100 for in-state undergraduates on all three regent universities after state funding fell through for a promised freeze.

However, Mills asked the regents to consider maintaining the freeze for the UI, while Iowa State University and UNI student officials lobbied in favor.

“The tuition increase won’t stand true with the values many Iowans hold: accessible, quality education at an affordable rate,” Mills said at the meeting earlier this month.

The regents amended the original proposal following her request, though not unanimously. The UI now has the lowest tuition among the three state universities for resident undergraduates as a result of the move.

“I did vote no on the tuition freeze. I did this because I did not think it would be fair for one university to be less expensive than the others,” Johnson said. “Iowa State and UNI are both outstanding schools, and they deserve that fairness. That is why I voted for the tuition increase. I felt like that was the best decision. I still stand by my vote today.”

The freeze serves as the third-consecutive year has not increased at the UI for affected students.

All UISG meetings are held in 252OD University Capitol Center.