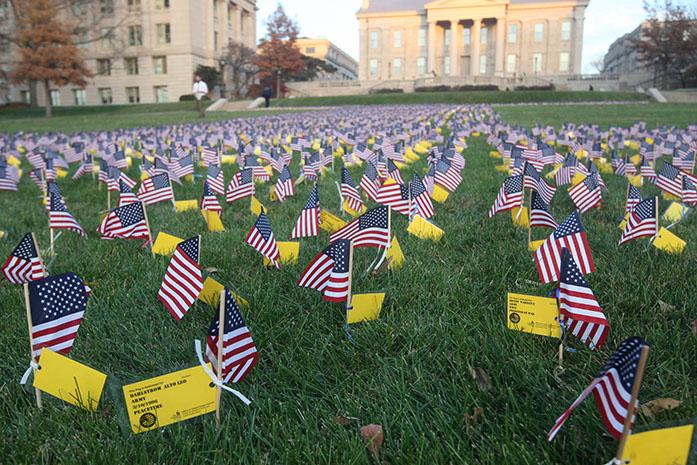 The Iowa Veterans Day Flag Display on Monday, Nov. 10, 2014. The display contains 5625 flags, each in honor of a Veteran that has a relation with the University. (The Daily Iowan/McCall Radavich)

A two-year veteran-transition pilot program will lose funding at UI in its first year with little explanation.

This program is federally funded, but the U.S. Department of Veteran Affairs decided to cut financial support by the end of this month.

Travis Arment, a military and veteran education specialist at the University of Iowa, is concerned about the cut.

“[The consortium] will lose every aspect of what it has built up until this point, and many of these services can’t be easily replicated,” he said.

A VA official did not return a message seeking comment.

On Veterans Day 2013, the Veteran Affairs Center for Innovation sponsored an idea of a veteran college transition program.

In 2014, the U.S. Department Veteran Affairs funded a $2.2 million grant to the UI in partnership with the Iowa City Veteran Affairs Health Care System to develop the consortium.

It was introduced to the UI campus a year ago as a two-year pilot program to help veteran students transition to college life.

The first year of the program was a building process in order to develop systems and materials. The second year was meant to be an expanding phase, during which the program would be implemented in other state schools, such as Iowa State University, University of Northern Iowa, and Kirkwood Community College.

“Funding will stop by the end of this month, and we still don’t have answers as to why,” Arment said.

Many are unclear of the specific reasons behind the VA’s decision to cut funding including Sen. Joni Ernst, R-Iowa, who is on the U.S. Senate Committee on Armed Services.

Ernst, a veteran, wrote an open letter to VA Secretary Robert McDonald in search of answers.

“Ensuring our nation lives up to the promises we have made to our veterans is our top priority,” she wrote. “We are concerned that the loss of this vital program may negatively impact the university’s efforts to serve Iowa’s student veteran population.”

The UI Veteran Association also sent out an open letter expressing a sense of loss with the defunding of the consortium. As students who reaped the benefits of the program first hand, the Veterans Association said cutting the program would leave behind every soldier at UI.

Mike Forrest, the program director for Ohio State University’s veteran affairs office, said a majority of its veteran programs are sponsored by the university, so federal funding isn’t a concern.

This isn’t a reality for UI veteran students.

“The university does a good job at helping our veterans on campus with programs, but the big thing [the consortium] does is it puts the focus directly on veterans,” Arment said.  “[The consortium] provides services that are geared toward veterans and no one else. That is what will be difficult replacing.”