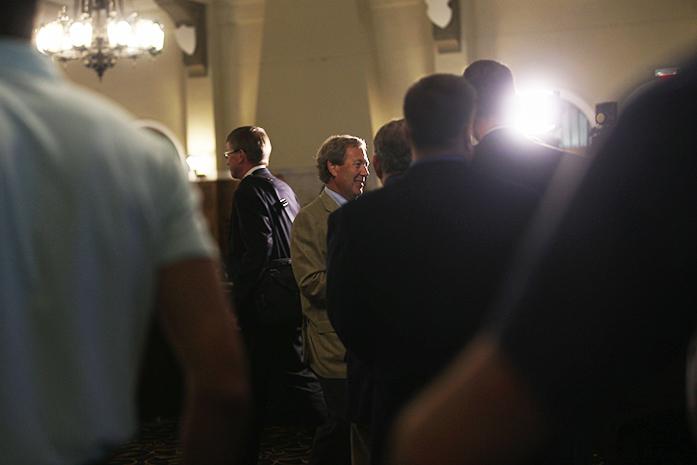 The newly appointed President Bruce Harreld talks to people of the community after a regents meeting in the IMU on Thursday, Sept. 3, 2015. Harreld is the 21st president of the University of Iowa. (The Daily Iowan/Margaret Kispert)

The group’s main objection was not in the selection of Harreld as president of the university. The council felt the Search Committee was not open enough throughout the selection process.

“We do not object to the selection of a candidate from the corporate world in principle but rather the lack of transparency in this process,” the Graduate Student Senate said in a statement.

The university has responded to the votes of no confidence by committing to the process the members of the Search Committee agreed on.

“It is important to note that the Search Committee collectively agreed, early on, to keep its activities and discussions confidential in order to recruit the best candidates and to encourage committee members to speak freely about those candidates,” the university said in a statement.

The regents also issued a statement regarding the previous votes of no confidence in the regents’ decision, saying times are changing.

“The landscape of higher education is changing, and the current ways of operating are not sustainable,” the regents said.

The members of the Graduate Student Senate made it clear they were not against someone from a corporate background becoming the president of the university.

“Many of us have worked in corporate settings and are not against the idea of non-academic university leadership,” the group said.

The university said it spent as much time as it could in order to obtain a large, diverse pool of presidential candidates.

“The Search Committee was told to be aggressive in identifying, recruiting, and vetting as many candidates as we could to get the biggest, best possible pool,” the university said.

The graduate-student group was also upset with the input received from members of the faculty and students in the regents’ decision, because the surveys from the university and forums had largely negative feedback in the winning candidate.

“Because of these factors, it remains unclear how the board, in the face of visible negative feedback from the university community, could have made this decision for the betterment of the University of Iowa,” said the grad-student group.

The regents have frowned upon the decision by some organizations of the university to have “no confidence” in their ability to govern the university.

“We are disappointed that some of those stakeholders have decided to embrace the status quo of the post over opportunities for the future and focus their efforts on resistance to change instead of working together to make the University of Iowa even greater,” a statement from the regents said.

The Graduate Student Senate ended its statement by welcoming the regents and future president to work to create a better university.

“Although we disagree with the handling and transparency of this presidential search and selection process, we extend an invitation to the Board of Regents, the incoming president, administration, and faculty to work together to strengthen the university as a whole.”