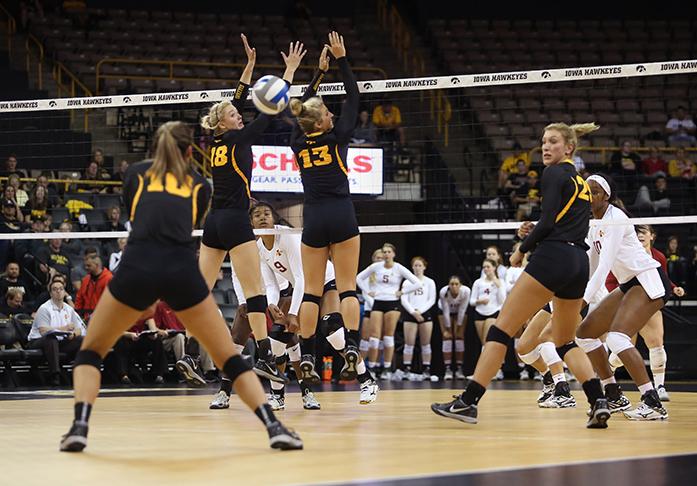 Iowa State middle hitter Samara West gets the ball past two Iowa blockers Lauren Brobst and Mikaela Gunderson during the Cy-Hawk Series in Carver-Hawkeye Arena on Friday, Sept. 11, 2015. The Hawkeyes defeated the Cyclones for the first time in 18 years, 3-1. (The Daily Iowan/Margaret Kispert)

Bond Shymansky’s team beat Iowa State for the first time in 18 years as well as a ranked Texas A&M squad.

After going 3-0 in the Comfort Suites Challenge, including a pair of signature wins, the Iowa volleyball program turned in a monumental weekend.

Action began on the morning of Sept. 11 against Milwaukee, which head coach Bond Shymansky said was by design.

“I scheduled it; I knew what I was doing,” he said. “I wanted us to get one home match under our belt before Iowa State.”

Later that day was a moment 18 years in the making. Entering the weekend having not defeated Iowa State since 1997, the Hawkeyes set out to make a statement. They did.

The Hawks dropped the first set, 25-17, and  usually, they might  have thought, “Oh, here we go again. But the Hawkeyes showed an ability to center themselves and, in the second set, unleashed some of the best volleyball the program has seen in years.

After posting a .188 attack percentage in the first-set loss, the offense looked crisp, using a .424 mark to secure the set. They appeared rejuvenated from the outset and jumped out to a 5-2 lead before extending to 9-5 on a powerful kill by sophomore Jess Janota that caused the crowd in Carver-Hawkeye to erupt. The Cyclones felt the momentum mounting and called a time-out trailing 11-6.

Iowa had struggled early in the season to maintain momentum but quickly built a lead of 17-9. After another Cyclone time-out, Iowa kept right on rolling and finished a 25-17 victory before a boisterous home crowd.

There was definitely something in the air, as an early 8-1 run to begin the third set served as proof that this match would be different from the Hawkeyes’ history. The lead grew to 16-10, and the fans and team could feel something happening. The Hawks posted a .500 hitting percentage in the 25-18 victory.

Iowa State did its darnedest to keep its bragging rights and led the Hawkeyes, 23-20, in the fourth set. However, Shymansky rallied the troops for one final push, and they came roaring back to win the set and the match in a fittingly extravagant fashion. They tied the set at 24 before using another Brobst kill to down, finally, the Cyclones, 28-26.

Brobst and Janota turned in career nights, with Brobst posting 17 kills on a .469 attack percentage, and Janota with 20 kills on a silly .514. Junior Loxley Keala had 55 assists, and freshman Reagan Davey had 10 kills. Freshman Libby Koukol led with 18 digs.

“As I’ve gotten older, I’ve learned my role and been able to utilize my skills but also my teammates’ skills on the court,” Janota said. “Overall, I think it was a good performance, not only me but my team.”

The Hawkeyes followed the monumental victory against Iowa State with a victory over No. 25 Texas A&M. After finishing the weekend by beating a ranked opponent, one thing became clear.