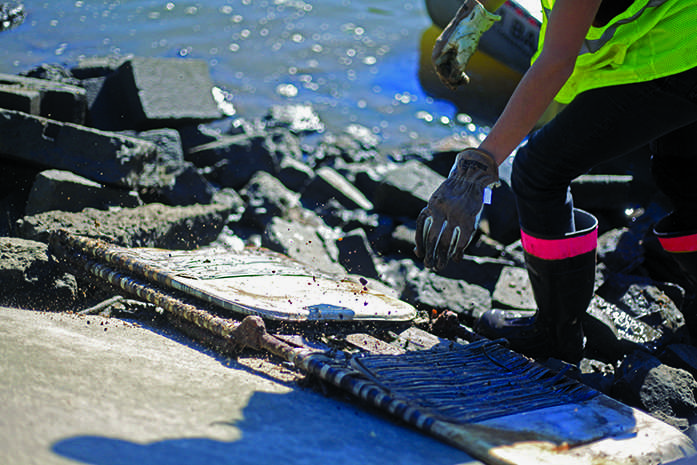 A lawn chair is thrown onto shore after being found in the river in Iowa City on Saturday, Sept. 12, 2015. Volunteers came out to haul trash from the waters of the Iowa River. (The Daily Iowan/Rachael Westergard)

Volunteers worked to clean up the Iowa River on Sept. 12, finding bikes and lawnmowers in the process.

Bikes and bedsprings were among objects pulled from the Iowa River this past weekend.

Around 100 eager volunteers once more tackled a 9.5-mile stretch of the Iowa River on Sept. 12.

Muddy boots and beaming smiles got right to work in the annual cleanup, with canoes hitting the water around 8:30 a.m.

The idea originally came after Project Aware, a statewide cleanup group with the Iowa Department of Natural Resources, picked up trash on the river in 2006.

“We found that the biggest bulk of trash that came out was actually from Iowa City to Hills,” said Carol Sweeting, a public works employee who helped to coordinate the effort.

Ever since, Sweeting and others have continued the tradition when weather and river flow have allowed for safe outings.

The Iowa River was named the third most endangered river in the country in 2007 by americanrivers.org, detailing main pollutants to be “fecal bacteria and sediment that originate from farm fields, livestock farms, industries, and town sewer systems, among others.”

Volunteers were passionate to see a change at the event.

“People do it. People litter all the time … I think we can absolutely change it,” said Anna Jones-Hughes, a University of Iowa graduate. “We just need to get everybody in the same mindset.”

Garbage wasn’t tough to find, with bikes, bedsprings, and even a lawnmower thrown onto the dump pile without tremendous surprise to those at the cleaning.

“This stuff is pollution. … It clogs things up,” Sweeting said. “There’s more to be picked up than you can get. You do what you can, and then you have to move along.”

Even in the river’s current state, Sweeting said, she is encouraged by the progress, noting that trash levels have definitely gone down.

“Everything really fell into place,” she said about the operation on Sept. 12.

Not only was the cool weather ideal, but the Army Corps of Engineers lowered the river’s height for the event, allowing for volunteers to work effectively and safely.

Local Natural Resources employee and cleanup volunteer Lynette Seigley said she was very pleased the Corps was able to help.

“Yesterday, we were flowing over 4,000 feet down the river and the river was about 6 or 8 feet higher,” Sweeting said. “There was no way we could have done a cleanup.”

The Corps was able to lower the water level while holding to its operating plan at the Coralville Dam.

“We have this new partnership with the Corps that may allow us to do this every year,” Sweeting said.

“There’s a long list of partners that are working to make this happen,” Seigley said. “Iowa City has been a partner from the very beginning, [as well as] the Iowa Flood Center.”

“Once you go and realize the things that we throw away, it goes to your heart, and it really makes you realize it’s on us,” Sweeting said. “If we weren’t here and we weren’t throwing stuff away, this Earth would look really different.”