Starting to feel the ‘Bern’ 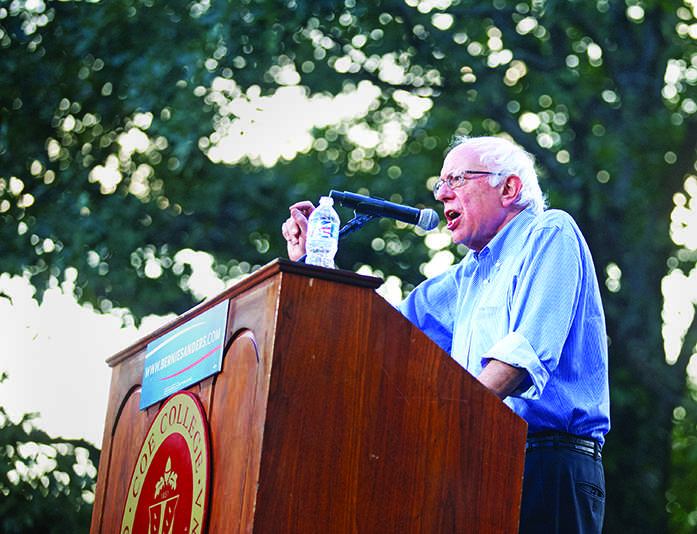 US Senator Bernie Sanders speaks at Coe College in Cedar Rapids on Friday, Sept 4, 2015. Sanders is running for president in 2016. (The Daily Iowan/Lexi Brunk)

Sen. Bernie Sanders is catching up to former Secretary of State Hillary Clinton in Iowa polling.

Former Secretary of State Hillary Clinton  has been sitting in the front-runner’s seat since before she announced her presidential bid.

But she forfeited that spot to Sen. Bernie Sanders.

In the past several months, Sanders, I-Vt., has jumped up in polling across the nation, even slightly surpassing Clinton in several state polls including Iowa and New Hampshire.

Justin Holmes, an assistant professor of political science at the University of Northern Iowa, said this is probably a pleasant surprise for Sanders — who, Holmes said, might have thought he was a long-shot candidate early on.

“For Clinton, on the other hand, this is a worst-case scenario,” Holmes said.

In a Quinnipiac University Poll released Thursday, 41 percent of likely Democratic caucus-goers said Sanders would be their choice; 40 percent said Clinton would be their first choice.

With 832 Democratic likely caucus-goers surveyed between Aug. 27-Sept. 8, there is a margin of error of plus or minus 3.4 percentage points.

“We’ve said from the beginning this would be a competitive caucus, and that’s why we have 78 organizers working across the state talking with Iowans about why Hillary Clinton is the candidate who will fight to make sure that cost isn’t a barrier to a college education and that debt won’t hold you back when you graduate,” Hillary for Iowa spokesman Patrick Burgwinkle said.

Clinton, who is the frontrunner, has been the presumptive Democratic nominee before — in 2008, when current President Obama won the nomination.

This cycle, Clinton expected to coast the nomination, Holmes said, especially with Sanders at first seeming like a long shot.

Sanders, an independent seeking the Democratic nomination and a self-declared democratic socialist, was going up against one of the most well-known politicians in America, the former first lady and former secretary of State.

Sanders, however, could soon top Clinton.

“The more people in Iowa get to know about Bernie, the more they like him and what he stands for,” Stephanie Schwinn, Bremer County Democratic Chair, said in a statement. “His ideas for rebuilding the American middle class and taking on the billionaire class are resonating here in Iowa and across the country.”

In New Hampshire, whose primaries are just eight days after Iowa’s Feb. 1 caucus, Sanders is also ahead of Clinton, according to a NBC/Marist Poll released this week.

Forty-nine percent of Democratic potential voters said Sanders would be their choice candidate. Clinton received only 38 percent. There is a margin of error of plus or minus 5.2 percentage points.

Travis Halm, who attended a Cedar Rapids’ labor union picnic that Clinton attended, said he believes Clinton is the obvious frontrunner. At the picnic, he said, there were far more people with stickers and posters supporting Clinton, even with a Sanders table set up at the same event.

Halm said he still doesn’t know whom he supports, and the election is pretty unpredictable.

“I’m going to vote for the Democrat no matter what,” he said.

Holmes said Clinton’s drop in the polls could make her seem like a vulnerable candidate, which could draw someone new in to the race, such as Vice President Joe Biden, former Vice President Al Gore, or even Secretary of State John Kerry.

But Holmes said he does not know if momentum will continue for Sanders.

He said Clinton may seem like a safe candidate, with a lot of voters saying they like Sanders but do not know if he could be elected.

On the other hand, Holmes said, in polls that match Sanders against Republican candidates such as Donald Trump or Ben Carson, Sanders does just as well as Clinton.

“This is generally good news for Sanders, and on a lot of fronts, this is bad news for Clinton,” Holmes said. “It looks a little more realistic now, that could be pretty hard to overcome for [Clinton] in some ways.”