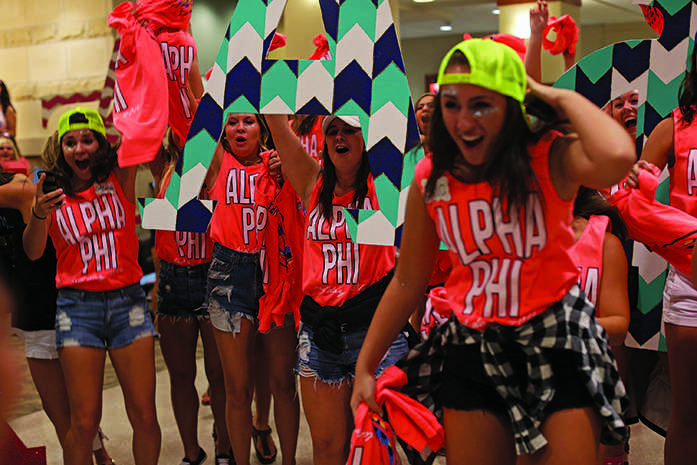 The University of Iowa chapter of the Alpha Phi sorority, which was founded in 1878, is feeling the heat after a video of one of its recruitment songs went viral.

The video shows a group of Alpha Phi members who identify themselves as sophomores singing about binge drinking, blacking out, and making degrading comments about other sororities and fraternities at the UI.

The video appeared to be recorded outdoors on the front steps of the sorority’s house, 906 E. College St. It was later picked up by websites such as TotalFratMove.com, a website for college students that heavily discusses greek life. The website posted the video suggesting the sorority could be kicked off campus. No such repercussion has been confirmed, as the Panhellenic Council and Alpha Phi were unable to be reached for comment at press time.

The university released a statement on the incident:

“This video is not reflective of the University of Iowa’s expectations for student organizations on campus and does not represent our fraternity and sorority community as a whole.

“The Division of Student Life is looking into the incident and will work with staff from Alpha Phi headquarters to respond appropriately to this disappointing behavior.”

The incident follows another chapter of the same sorority facing criticism for a recruitment video it made.

The University of Alabama Alpha Phi chapter’s recruitment video was criticized for not featuring enough diversity. The sorority eventually took the video down, but not before it was also slammed online for its objectification of the women in the video.