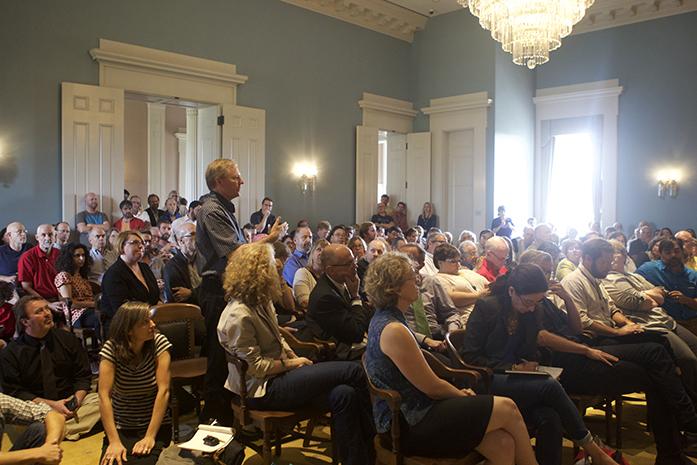 University of Iowa faculty gather for an emergency meeting inside the Old Capitol building Tuesday. The group discussed calling for a no-confidence vote in the state Board of Regents. (The Daily Iowan/Carly Matthew)

The message was plain and simple: the University of Iowa was betrayed.

The Faculty Senate, which bridges faculty and administration, voted no confidence in the regents Tuesday in response to deep concerns over the presidential-search process and whether their feedback was considered. The UI undergraduate and graduate student governments followed suit later that night.

However, faculty said, the vote will only be the first of many future steps that could include open letters to Gov. Terry Branstad and Iowans — as well as a vote of no confidence in Harreld himself.

The UI declined to comment. In a statement, Regent President Bruce Rastetter said “the landscape of higher education is changing, and the current ways of operating are not sustainable.”

The choice of Harreld — a business consultant and past corporate leader with no university administrative experience — over three conventional academics drew the public ire of numerous UI constituents, particularly faculty members. An informal survey found virtually no support for Harreld.

“After listening to all stakeholder feedback as well as having frank conversations with each of the candidates, the regents unanimously thought Bruce Harreld’s experience in transitioning other large enterprises through change, and his vision for reinvesting in the core mission of teaching and research, would ultimately provide the leadership needed,” Rastetter said in the statement. “We are disappointed that some of those stakeholders have decided to embrace the status quo of the past over opportunities for the future and focus their efforts on resistance to change instead of working together to make the UI even greater.”

The idea of no confidence did not receive full support among faculty and undergraduate student government.

Various faculty members brought up concerns over whether the vote would be too “reactionary” and ultimately lose traction. One even wondered whether the move would prove to be “disastrous.”

Others said public condemnation could prove useless and turn the public against faculty.

“I think the Senate should think strategically about how to respond, especially once you get into a political world like this,” said Jim Throgmorton, a UI professor emeritus of urban planning and an Iowa City city councilor.

Others said it would be important to “use this one news cycle to the best of our ability” and lead a positive narrative, not a victim narrative.

The vote among undergraduate student government was 21 in favor, nine opposed, and two abstaining.

“The resolution is a symbolic gesture that acknowledges that maybe the undergraduate student population at the university were not adequately represented by the decision or the process by which the Board of Regents selected the president,” said UISG Sen. Geo Liriano.

However, other members were concerned about burning bridges with the regents, with whom they work closely.

The graduate student, GPSG, did unanimously pass a vote of no confidence in a closed session and released a statement afterwards. The statement was directed at the regents and the search process, not Harreld.

“It is the stance of the members of GPSG that the process of the presidential search was not transparent and that the pretense of transparency throughout the search wasted taxpayer money and UI constituency members’ time and effort,” the statement reads. “Additionally, we would like to extend an apology to the other three well-qualified candidates who we believe were made to interview in an ‘open’ process under false pretenses.”

During the Faculty Senate meeting, Bohannan — who served on the 21-member search committee — noted that she “really wish[ed]” she could provide details on how Harreld made it as a presidential finalist but a confidentiality agreement stopped her.

Harreld is expected to go on the clock in early November under a five-year, $590,000 per year contract.

UI governance groups previously voted no confidence in the regents late 2006 after the regents restarted a presidential search to replace David Skorton. The second attempt found Sally Mason, who came to the UI after serving as provost at Purdue University.

In previous days, the graduate student union COGS and the UI Chapter of the American Association of University Professors released condemning statements.

The UI Staff Council is due to meet this afternoon to discuss the search outcome. Additionally, the regents will meet today in Cedar Falls for a regular meeting.