The rise of non-politicians 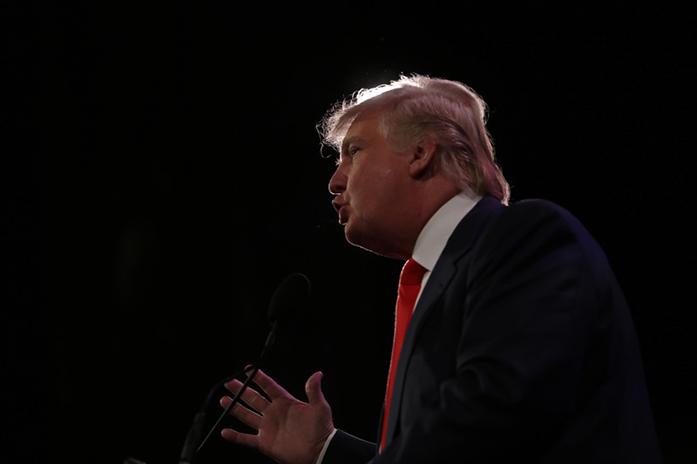 Donald Trump gives a speech during the Freedom Summit in the Hoyt Sherman Place in Des Moines on Saturday, Jan. 24, 2015. During he speech, Trump said he was concidering running for office. (The Daily Iowan/Margaret Kispert)

Politicians as a whole, it appears, would be well served by a rebranding.

In the latest GOP poll by Monmouth University, the top

two candidates in the Republican Party race have no political careers. Donald Trump, who neither needs nor deserves an introduction, led the first poll following the Republican debate, receiving 30 percent support. This bizarre phenomenon is nothing new.

It is news, on the other hand, that neurosurgeon Ben Carson moved into second place with 18 percent support, thereby pushing Jeb Bush, with a meager 8 percent, into third.

The Monmouth poll is yet another piece of a growing trend in America: U.S. citizens are tired of politicians. Moreover, voters are willing to go to extreme lengths to prove that they’re serious, and something must be done to buck the trend.

Distaste towards true and traditional politicians, it should be noted, is nothing new in American society. Take for example, Jesse Ventura and Al Franken in Minnesota and Arnold Schwarzenegger in California.

Perhaps it has nothing to do with this generation or the desire to move away from partisan politics and more to do with the allure of a nontraditional candidate. But a Google search of the words “hate” and “partisan politics” merits dozens of pages full of articles about why Americans have grown tired of the U.S. political system.

Fatigue in traditional politicians is manifesting itself more strongly than usual this election season, though. Not only are the two top candidates non-politicians, but they’re also former Democrats who represent some pretty extreme beliefs. While Trump has the potential to be the most politically incorrect president ever, Carson has the potential to be one of the most religious in decades — two extremes that don’t usually sit well with voters.

If Trump’s personality were placed in the frame of a tried and true politician, it is hard to imagine that individual polling well with the general public. Conversely, Carson’s calm demeanor and quiet brilliance may surprise voters in a run-of-the-mill politician as well.

In an article published last summer, the Washington Post reported that three out of four Americans were dissatisfied with the way the political system works and eight out of 10 claimed they trusted the government to do the right thing only part of the time. With such a high level of distrust in the political status quo, the shift towards nontraditional candidates begins to make some sense.

This year, the list of Republican candidates reads like a who’s who of people without political experience. Heading into campaign season, Jeb Bush, Scott Walker, or even Chris Christie appeared to be likely favorites of the Republican Party.

When Trump made his bigoted campaign announcement, few believed he would be where he is in the race today. And even after a debate in which he spent very little time talking about the issues and treating the other candidates like contestants in his “Board Room,” he still sits atop the polls.

If Americans have such a big issue with traditional politics that they’re willing to make Trump a front-runner, then it’s clear the system is broken. And should Trump stay on top, then it looks like things will have to get a whole lot worse before they’ll get better.