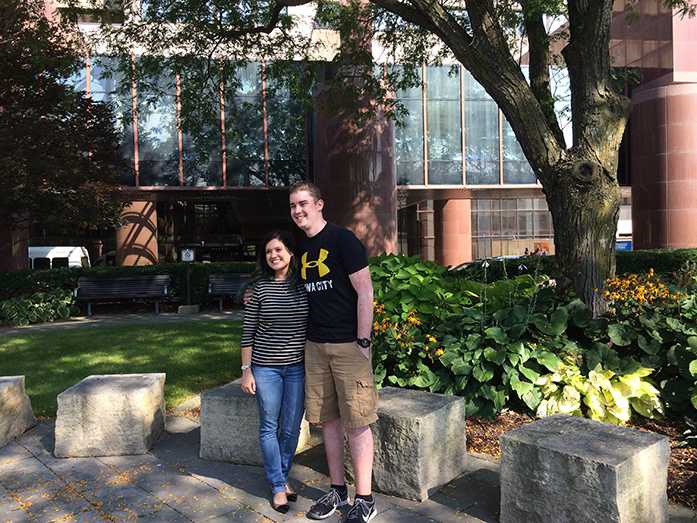 Anxious eyes shifted across the room on Sept. 4 as Ormarie Vazquez-Silva was called up to meet Cody Cohen for the first time at University of Iowa Hospitals and Clinics fountain lobby. It was an event of tears, joy, and a true story of revival.

UI student Cohen was 18 years old when he was diagnosed with acute myelogenous leukemia, requiring a stay of 104 days at UIHC.

Two years later, and after much anticipation, Cody got to meet the bone-marrow donor who likely saved his life — Vazquez-Silva, a Puerto Rican graduate student who attends the University of Georgia.

“It feels like I’m in a dream right now,” said Cohen, a Fairfield, Iowa, native, following the long-awaited meeting. “It’s definitely surreal. I haven’t felt this kind of rush of so many different emotions before.”

Vazquez-Silva was the only match found in the national bone-marrow donor registry — Be the Match — though the two had to wait a year before they could even know the names of one another for confidentiality reasons.

“I’ve seen pictures of her, and we’ve talked on Facebook, and we’ve texted, and Snapchatted, of course, but it’s so much different in person,” he said. “Being able to give her a hug and hear her voice and feel her hug is a nice feeling.”

The event was held to share their story as well as to raise awareness and funds for the registry process.

“Every four minutes, someone is diagnosed with blood cancer,” said UI senior Colton Jensen, a volunteer for Be the Match. “There’s a large volume of people who need help, and the process of donating bone marrow is 70 percent effective in eliminating that person’s cancer.”

Cohen was first transplanted with cells from an unrelated donor approximately two years ago. The transplant failed, leaving him without an immune system for 104 days at UIHC and relying only on donated blood.

A worldwide search for a donor yielded only one result, a 22-year-old from Puerto Rico —Vazquez-Silva. She joined the registry just two months before she was called.

“I can’t even express [the feeling] in words. It’s the most amazing feeling that anybody can have,” she said about the donation process.

Cohen was 17 years old when he was diagnosed initially with myelodysplastic syndrome, which led to full blown leukemia soon after.

“Like any 17-year-old football player, in high school I was only worried about girls and football and college … I was thinking [the syndrome] was another steppingstone, and I can get on with my life,” he said. “Right before my 18th birthday, it turned into the full-on leukemia.”

While doctors caught the condition before it had developed into leukemia, Cohen said there were setbacks before the first round of chemotherapy could take place, such as a lung surgery to prepare for the treatment. These procedures took about three months.

For leukemia, the treatment grew to three rounds of intense chemotherapy. His family waited for a month with only partial matches found. But on his 18th birthday, he got good news — a 100 percent match was identified.

“I just remember everybody lit up that was packed into our kitchen. Everybody started giving hugs, and I’m sure a few people were crying … [Vazquez-Silva] saved my life,” Cohen said.

After the transplant, cohen remained in the hospital for some time, followed by a few months of being bedridden at home.

“I slowly was able to get out and walk with a cane,” he said. “It was little steps being able to walk without support.”

The healing process is extensive, but he is thankful to be healthy again as he attends his first year at the UI. He is now 20.

“I still have a lot of healing to do … but I’d rather be alive and having to work on it [recovering] than not be alive,” he said.

Cohen plans to study mechanical engineering with a focus in aerospace. He and his friends are getting into as many intramural sports as they can as he gets his strength back.

“I’m retraining myself to be able to think about my future and plan things out further down the road than just next week.”