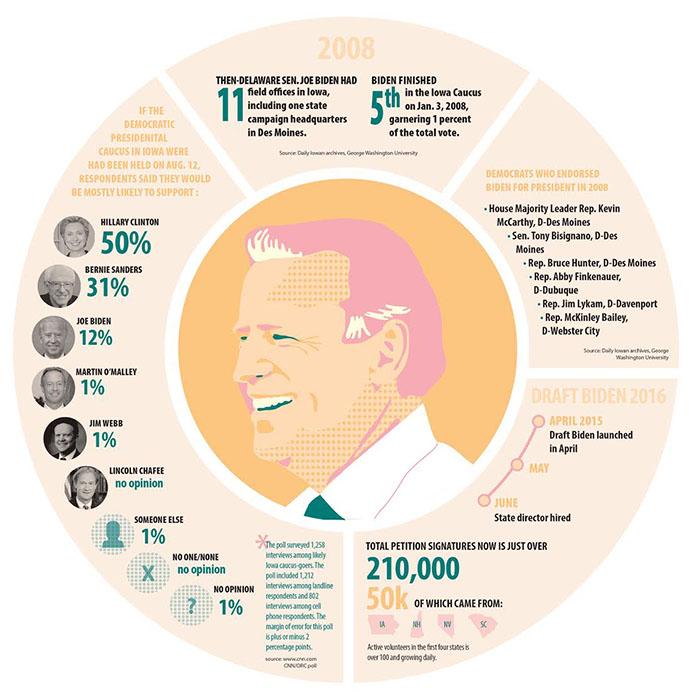 Should Vice President Joe Biden plunge into the 2016 White House race, these well-connected Iowa political activists would be right by his side in the first presidential nominating state, serving as key foot soldiers.

As Vice President Joe Biden — President Obama’s right-hand man — contemplates a White House bid of his own, an arsenal of influential Iowa Democrats is emerging, ready to stand by his side.

Their backgrounds vary from county financial wonks and state lawmakers to a former regional director of the veep’s failed 2008 presidential campaign. 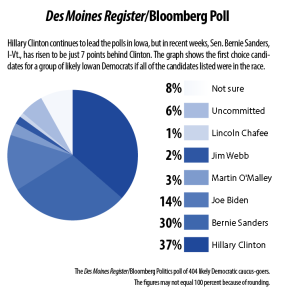 In a series of interviews with The Daily Iowan, the following power players said they would serve as his foot soldiers, caucusing for a man known as one of Washington’s most skilled retail politicians and a leader who many say has stuck to his humble roots, even as his political stock has risen.

It has risen so high that even without declaring, Biden now sits at 12 percent in the latest CNN/ORC poll, released Aug. 12. The margin of error on the sample of likely Democratic caucus-goers is plus or minus 2 percentage points.

To prove their loyalty, each has brushed off propositions from other Democratic presidential campaigns — including party front-runner Hillary Clinton, a friend of Biden’s — as they patiently wait to see what the 72-year-old two-time presidential candidate’s next move becomes. 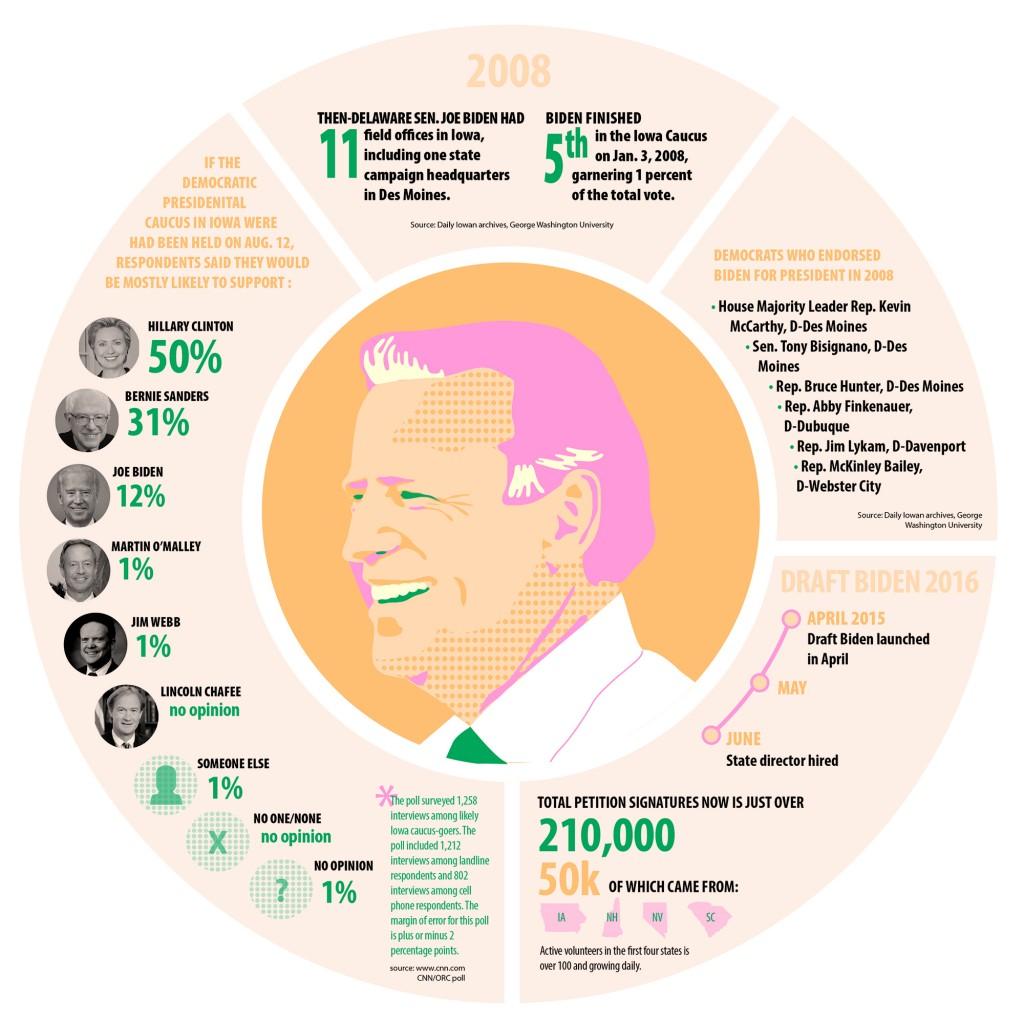 Bisignano, a more than 10-year veteran lawmaker in the State Capitol, is a Biden frontman. The Des Moines Democrat was a Biden booster in 2008, serving as a member of the Delaware senator’s state steering committee.

Having served as a president of a local AFSCME chapter, Bisignano could help Biden rally support from labor unions, a key demographic for Democrats. And as a former project manager for the Polk County Democrats, the senator is well-versed on the movings and shakings of legislation in Polk County, the state’s most populous.

“If Biden got in the race, I don’t think anyone can say he’s not the most qualified person running for president,” Bisignano said. “This man has spent 40 years in Washington, and he’s not rich. To me, that’s character.”

Bisignano won re-election to the Iowa Senate in 2014, and he chairs the Labor & Business Relations Committee. He sits on the Appropriations, Economic Growth, Judiciary and Local Government Committees.

Although Bisignano hasn’t spoken privately with Biden since the 2012 presidential election, the two have had long conversations in the past. During the 2015 Iowa legislative session, Bisignano met with operatives from the Draft Biden movement at the State Capitol.

In recent months, Bisignano has courted freshman and longtime lawmakers at the Statehouse to join the Biden movement.

On potential Biden challengers, Bisignano said: “It’s very difficult for me to get enthused about a Clinton campaign.”

“Bernie Sanders has a great message,” he said. “But you’re not going to win in this country calling yourself a socialist. It’s a deal killer.”

This freshman lawmaker from Newton may have been new to the Statehouse, but he packs strong economic ties. He’s worked for some of Iowa’s largest employers, including Hy-Vee and Iowa Telecom and is an ally of former Democratic Gov. Chet Culver.

While it is unclear which candidate has Culver’s backing, Biden has previously praised Culver and his family in recent trips back to the state.

As Newton mayor, Allen flew with Biden from Minneapolis to Washington, D.C., to discuss local economic-development opportunities.     As Newton was losing its largest employer, Maytag, Allen sought out Biden’s national perspectives for solutions.

As the vice chairman of the Senate Ways and Means Committee, Allen pushed to pass legislation legalizing medical marijuana in Iowa last year. Under the Capitol dome, he is known as a kind but diligent negotiator who goes to bat to garner support from Republicans.

He last spoke privately with Biden, who he refers to as a “quiet giant,” in 2012.

Organizers with the Draft Biden movement reached out to Allen two weeks ago, and aides with each Democratic presidential campaign have been in contact with Allen in case Biden doesn’t run.

This financial hawk has been crunching numbers for Jasper County for more than a decade, while he has stayed close to Biden.

“Each time he stops in, he doesn’t just hit the big donors and power players,” Bishop said about Biden, who has strong relations with the state’s blue-collar factions.

The two — who share mutual friends in the Legislature — have met several times, but Bishop said none quite compares to the gratitude he received when his mother lost a long battle with cancer.

“In the mail came a card from Joe Biden. It wasn’t long, it wasn’t overly eloquent, just a card, saying, ‘Thoughts are with you,’” Bishop said. “For somebody of that stature to take a little bit of time and drop a note to let you know they’re thinking of you, it kind of means something. He’s one of us, and he doesn’t forget the average people.”

Bishop’s name has been floated recently about seeking higher office. He swept the 2010 general election with 99 percent of the vote.

In the 2008 election, Bishop supported Democrat John Edwards, even appearing in a one-minute TV ad as a laid-off worker at Maytag.

Goodmann Miller is a Biden front-woman who has spent the last several months courting Dubuque-area Democrats to look to Biden as a prime alternative to Clinton.

In 2008 as Biden’s regional director, she was a mastermind behind luring in large crowds for the then-senator.  She is well-known in northeast Iowa for having strong public-relations chops, and she led Dubuque’s initiative to redevelop the historic Millwork District in 2009 and 2010.

As she described senior Biden as honest, authentic, and resilient, she recalled one story her family shared with the Bidens.

“It was just another example that shows how pleasant and centered a man he is,” she said by phone about the vice president as she pieced together the names and information of additional state leaders to court.