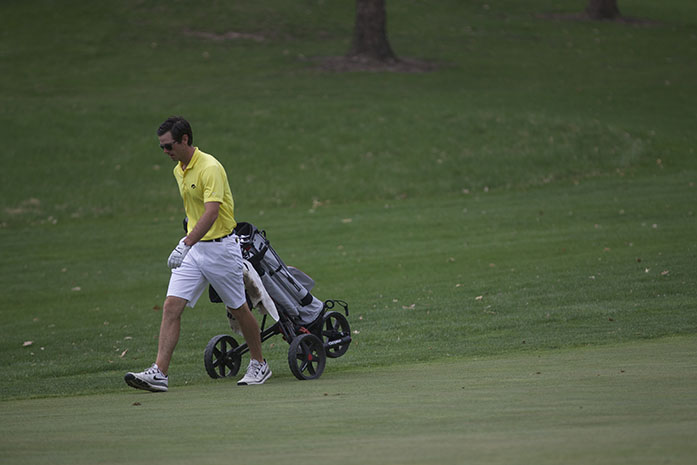 Good summer and team chemistry give confidence to the Hawkeyes in the new season.

With the new season just about to begin for the Iowa men’s golf team, the team is confident heading into the coming season because of the amount of practice put in and tournaments played its members during the summer

College golf is broken into two halves, fall and spring. Traditionally, golf is a sport that lasts from spring until fall, with the majority of the season being in the summer. While the team doesn’t play during the summer break, the players are encouraged by their coaches to play in as many tournaments as possible during that time.

“Everyone competed a lot this summer, and I think that’s something that is going to help us out a lot during this fall season,” said head coach Tyler Stith. “We’ve had Carson Schaake compete in his first PGA tour event. Nate Yankovich qualified for match play at the U.S. Amateur, and Raymond Knoll played really well in a couple of amateur events, as did Sam Meuret.”

Stith was excited about juniors Schaake and Knoll as well as senior Yankovich playing in larger tournaments over the summer. The events usually draw a much broader field — including professional competition for Schaake — than the golfers are normally accustomed to.

He qualified for his first PGA event at the John Deere Classic, and it proved to be quite the experience for him.

“I learned a lot from the John Deere,” he said. “Seeing all the pros playing was incredible, and it was a really good first experience, and it makes me want to get back out there and keep working hard and keep getting better so I can be out there on a daily basis.”

Masters and U.S. Open champion Jordan Spieth played in the John Deere Classic this past summer and just being able to play in the same tournament increased Schaake’s motivation to succeed.

Along with Iowa players playing in larger tournaments this summer, they have great chemistry in the locker room, which also improves their overall confidence.

“I’m really excited. We have a really good group of guys, and we have really good focus in our locker room,” Knoll said. “We all have a good set of goals in mind, and we’re all working together to achieve those goals, and we all feel comfortable with each other.”

Even though golf is an individual sport, there still needs to be good chemistry.

With the help of practice and playing in numerous tournaments in the summer, along with good team chemistry, the Hawkeyes are ready to play their first tournament on Sept. 14 at the Gopher Invitational in Minneapolis.

“I definitely love our chemistry we have this year,” Knoll said. “I think it’s different, and it’s a lot more efficient for what our goals are, so I’m pretty excited.”