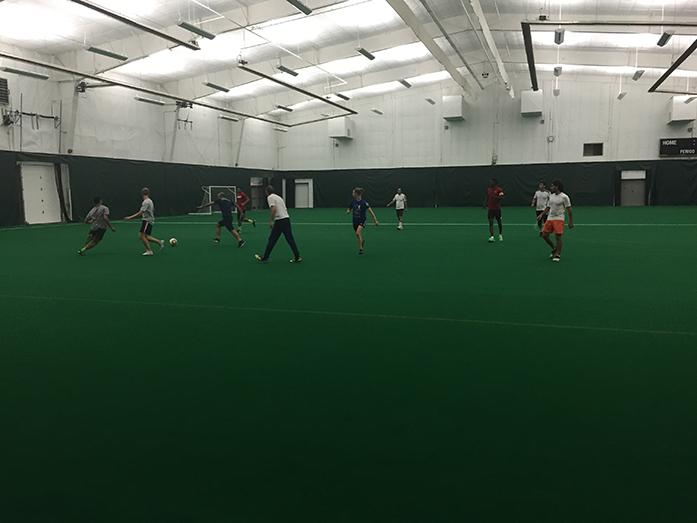 A group of more than a dozen pickup soccer players stood outside the Campus Recreation & Wellness Center together in a small protest on the evening of Aug. 28.

The players watched several men playing pickup basketball next to the soccer court, which was locked up and unused.

The loose group of students and community members used to gather here three times a week to play pickup soccer in the MAC gym of the Rec Center. The MAC gym is designed for indoor soccer, with curved corners and goals built into the walls.

While the gym was being repaired, the group played pickup soccer at the Hawkeye Tennis & Recreation Complex. The group was fine playing there, but because it is located far from the central campus, it was more difficult for students and community members without cars to get to the complex.

Now that the MAC gym will open again soon, the players look forward to return to the Rec Center.

However, Recreational Services recently let them know that pickup soccer would not be allowed back in the center, but they may continue playing at the tennis complex.

Recreational Services said many other groups want to use the gym, such as fitness classes, and that the crowd of soccer players waiting for their turn to play poses a fire hazard.

“It’s understandable some soccer players are disappointed soccer is moving to the [tennis complex], but it’s important to understand that there are many students who have been asking for other activities in the MAC Gym, and they will be pleased by the change.”

In February, a soccer ball hit a sprinkler located just above the goal. The sprinkler went off and the gym flooded, making it unsafe to play on.

The group played in the tennis complex while the MAC Gym was closed. They assumed this would be temporary, but now it is their only option.

“Recreational Services has made the decision to move indoor soccer from the MAC gym to the [tennis complex] indoor turf fields,” Timmons said. “Those wishing to participate in indoor soccer may do so on a drop-in basis at the [tennis complex] exactly how drop-ins occurred at the [Rec Center]. Renting turf time is also an option for those desiring exclusivity of the turf.”

As the weather gets colder and university sports begin to pick up, members of the group fear availability in the tennis complex for pickup soccer will be reduced.

“It’s like saying you’re going to drain the swimming pool for bootcamp and zumba,” said Ash, a community member who preferred not to give his last name. “It’s like saying Kinnick Stadium is for field hockey or golf instead of football.”

By the time of publication, Timmons had not responded to questions about what would replace soccer.

The pickup soccer group operates a Facebook page with more than 600 members. Dozens of people show up to play on the nights they can in the tennis complex. The group includes a number of international students.