False candidates make their polling marks: What Deez Nuts and other faux candidates say about polling. 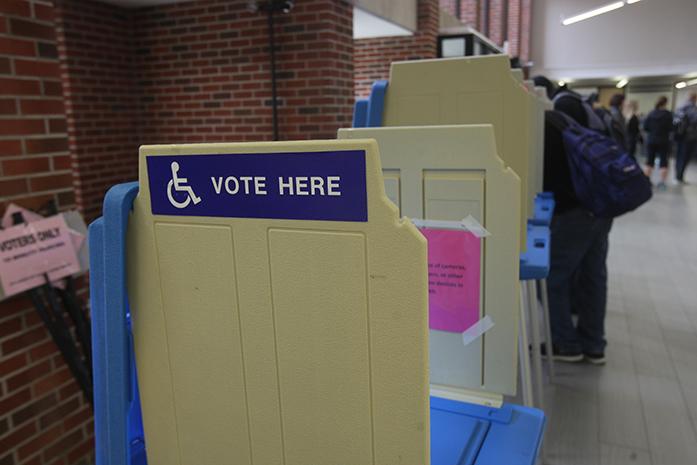 Students exercise their freedom by voting at one of the twelve polling stations in Iowa City on Nov. 4, 2014. (The Daily Iowan/McCall Radavich)

It may have taken an Iowa teenager, but businessman Donald Trump temporarily shared the political spotlight with another, albeit unlikely, challenger.

Deez Nuts, 15-year-old Brady Olson of Wallingford, Iowa, sparked national headlines after his request to be included in presidential polling was granted by Public Policy Polling of Raleigh, North Carolina.

But more than possibility of a meme becoming president, a remote occurrence given Olson’s lack of constitutional muster, are a couple of startling facts that pollsters and experts say the fascination help reveal.

One problem, an Iowa pollster pointed out, is that people may just give a response for the sake of responding to a question.

In the case of Deez Nuts, pollsters say, people might be just latching onto the joke. But when it comes to someone such as Texas Christian University political-science Professor Emily Farris, it is a different story.

Nine percent of respondents in North Carolina poll conducted by Public Policy Polling said they would vote for Nuts as an independent in a hypothetical general election matchup with Hillary Clinton and Donald Trump. Christopher Budzisz, the director of the Loras College poll, said that those respondents may just want to get in on the joke, but when it comes to Farris, the problems become more apparent.

“That seems like someone is giving an answer that they have no real basis for but probably just giving an answer,” Budzisz said. “Inherent in all polling is the problem of people not giving a response that is not genuine.”

Like Nuts, Public Policy Polling included Farris, who is not running for president, in one of its surveys to test what would happen.

Justin Mayhew, a communications specialist for the polling firm, said he did not think Nuts was a “joke”; instead, the fill-in candidate allows Public Policy Polling to test with a control.

“I think voters want an alternative,” Mayhew said. “… We are giving people what they want — it is clear from result that people want a third party candidate, because neither party is resonating well with electorate right now.”

Testing a control candidate was also why Farris and others have been included in earlier polls, Mayhew said.

Despite having no national ambitions, 20 percent of respondents had an unfavorable view when asked about their position on Farris. Three percent of 685 national Republican primary voters interviewed from May 7 to 10 said they had a favorable view of Farris.

The bottom line is that with a 3.7 percent margin of error, it is possible a quarter of respondents said they had an opinion about a nonexistent candidate.

Such ruminations would seem a lot less serious if polling was not used as a metric for debate participation. Both CNN and Fox News have used or will use national polling to whittle down the Republican field into a manageable number of debate participants.

A large amount of coverage can lead to a feedback loop in which candidates are said to be performing well, then subsequent polling backs up the original claim, and later coverage continues along the same lines.

“That can be troubling for a democracy when people’s responses in polling may be more reflective of media action than what people are deciding on their own,” said Budzisz, also an associate professor of political science at Loras.

As for Olson, he is just basking in the attention that comes with a higher status in the polls.