Darkness in the panels 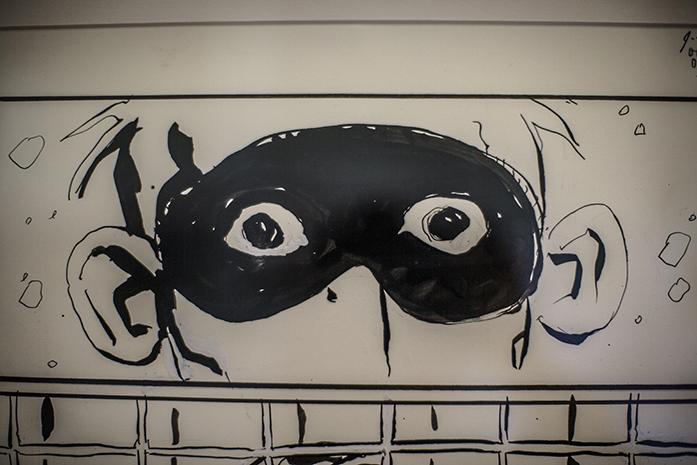 A comic by Jeff Lemire, of Canada hangs inside the Fairfield Arts and Convention Center on Friday, August 21, 2015. Fairfield held an open gallery displaying the works of several comic book artists including Bryan Lee O'Malley of Scott Pilgrim fame. (The Daily Iowan/Sergio Flores)

In Fairfield, Iowa, there’s a quaint little art gallery that has hosted a peculiar display since early this month.

The Comics & Graphic Novels gallery in Fairfield’s Arts and Convention Center, 200 N. Main St., presented by the University of Iowa Museum of Art, is situated in one inconspicuous corner of the enormous main hall, where it will remain until Sept. 25. Humbling to see that purveyors of the medium are showing such modesty.

Most of the comic panels on display are somber and monochromatic, and they retain a brutal humanity that superhero comics have rarely achieved. This is a medium that suffered through the borderline sophomoric Dark Age of the 1980s and 1990s — when even the most colorful superheroes were so edgy a dodecahedron thought it excessive.

The gallery is quick to show that even token “good” superheroes such as Captain America aren’t immune to this, even in the modern day. The panels featuring him were drawn by Mitchell Breitweiser for 2007’s Captain America: The Chosen; a darker, modern tale written by the creator of Rambo, David Morrell. Images of war, patriotism, and posttraumatic stress disorder sear the brain and prepare visitors for the more independent, lesser-known works to the right.

Perhaps the most recognizable artist with work is on display is Bryan Lee O’Malley, creator of the Scott Pilgrim series. The art in question isn’t from Scott Pilgrim, originating instead from Street Angel Pinup, but O’Malley’s style is unmistakable.

However, to single out O’Malley does a disservice to the other artists on display, just as failing to see the gallery does a great wrong to the medium O’Malley and other artists similar to him fought to get into.

The greatest injury of all, though, might very well be the gallery itself.

Despite being sponsored by the UI Museum of Art, the gallery is little over an hour’s drive from Iowa City and is an anticlimactic affair. While Fairfield is a scenic slice of America, this attraction is deflating and should have been closer to the UI to grant the university and Iowa City communities better access to it. Though admission is free, the real cost is gas and a dash of open-mindedness to appreciate the impact the work of these men and women can have on us and our culture.

The artists themselves are, of course, not present for a Q&A. One may assume they signed off on the display — with appropriate attribution guaranteed — with no intention of ever setting foot in Fairfield.

Interested parties should avoid all this if jaunts out of town are not permitted by time or finances.

Comic-book and graphic-novel aficionados in particular should start petitioning the school for these kinds of art galleries to be put up closer to campus. The Iowa Comic Book Club, among other organizations and individuals, could help future events such as this grow and thrive in our artistic community.