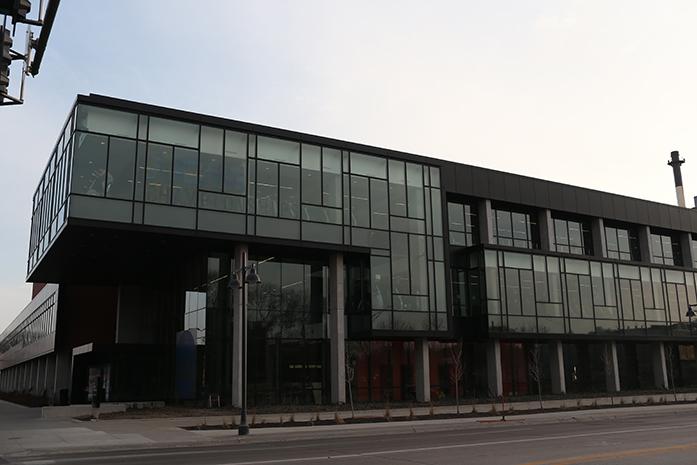 The Campus Recreation and Wellness Center is shown on Sunday, March 22, 2015. The CRWC will be closed from Monday to Sunday due to the men's NCAA Swimming and Diving Championships. (The Daily Iowan; John Theulen)

The University of Iowa Recreational Services offers much more than just a gym.

The Campus Recreation & Wellness Center will host the first RecFest from 2-6 p.m. today to show students and the community all the things that are available through Recreational Services.

The event is open to the public and has no charge. People can explore the different programs that Recreational Services provides, which include many sports and outdoor activities.

“Recreational Services is a pretty large and diverse department that manages many facilities and several unique programs,” said Kelly Teeselink, the marketing coordinator for the department. “Since we’re so spread out, it’s hard to showcase our entire department as a whole very often.

“While the [Rec Center] and the programs that take place in it are pretty high-profile on campus, many people might not know that we also oversee intramurals and sport clubs or manage the Macbride Nature Recreation Area, or that we have a rowing program. This is a way for everyone to see how connected to the community we really are.”

The Rec Center lobby will have information tables set up for all the programs that Recreational Services offers, from intramural and club sports to such outdoor activities as hiking and camping. The climbing wall will be open for anyone who wants to try to climb to the top, free of charge.

Also, the Macbride Raptor Project will showcase live falcons, owls, and hawks during the event. Different birds will be featured between 3 and 5 p.m.

“I didn’t realize how many awesome things it oversees until I began working for it. I mean, how many students know they can rent camping gear or go see live falcons up close?”

There will be prizes such as a FitBit and personal training sessions, plus free pizza and frozen yogurt.

Attendees can give spikeball a try, as well as two other intramural sports: cornhole bean-bag toss, a classic tailgating game, and Hot Shot contest, a two-on-two basketball game to score the most baskets in a time limit.

“Even if you aren’t very competitive and want to try something you’ve never done before, intramurals can be a lot of fun,” said Tommy Schorer, a Recreational Services assistant director. “They are a great way to be active and have some fun with friends.”

RecFest is also geared toward students who want to make connections at the UI.

“Our programs not only help students find a fun way to stay active, it also provides an opportunity to meet new people,” Teeselink said. “RecFest will allow students to learn about everything and then figure out what’s right for them.”