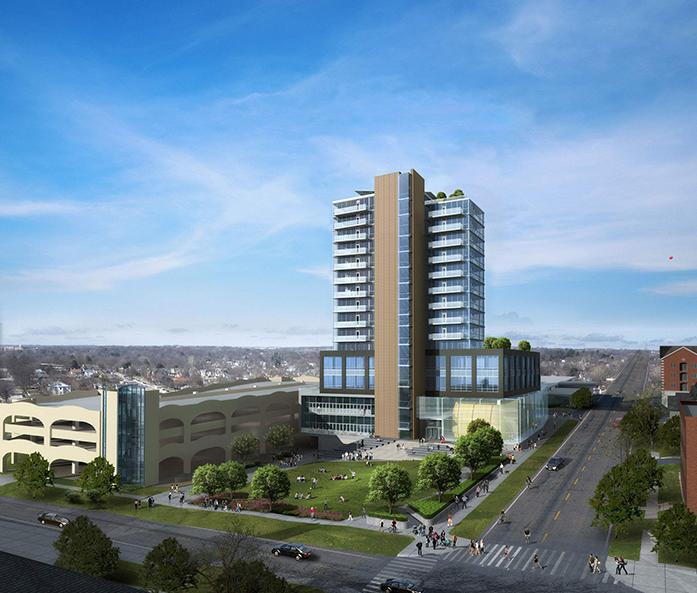 The discussion over proposed development of the Chauncey has left the City Hall and moved into the courtroom.

Attorneys representing the city of Iowa City and Trinity Episcopal Church will meet on Aug. 12 to set a timeline to discuss the church’s lawsuit against the city on the Chauncey-site rezoning.

Chris Warnock, the attorney representing Trinity, said the church is not seeking any damages or money through its suit.

“This is a way of finding out if the city’s actions in rezoning Chauncey were legal,” Warnock said. “We’re very focused on two certain issues with the rezoning.”

Those two legal issues are whether the city complied with Iowa Code in its rezoning as it relates to Iowa City’s comprehensive plan and whether the city compiled with state law requiring a supermajority vote of approval when 20 percent of surrounding property owners oppose a rezoning.

“The city examined the plan and determined it did not need to make any amendments in order to rezone,” she said.

Warnock said the other issue of surrounding property owners objecting to the rezoning is a matter of public versus private property.

“The city is saying that since it owns the majority of the land, and it doesn’t object to the rezoning, that this is basically a nonissue,” Warnock said. “But how can 20 percent of the ≠=private landowners be the city? Wouldn’t that make the adjoining land public land? We filed this to make sure private property owners aren’t rolled over.”

Greenwood Hektoen said the city would like a quick resolution to the proceedings.

“We hope to get a hearing by mid-October,” she said.

Warnock said he expects things to move quickly as well.

“It makes sense to have this resolved quickly,” he said. “We expect to have a decision by the end of the year.”

One man who hopes the proceedings go quickly is Marc Moen, the developer behind the Chauncey project.

“It’s disappointing that we had to put the whole project on hold while this gets worked out,” he said. “Especially since we worked through several design issues to make sure the shadow this building casts is no greater then a CB-5-zoned building.”

A building zoned CB-5 is, on average, around four and a half stories tall, Moen said.

One of Trinity’s main concerns with the project is if it is in the best interest of the community, Warnock said.

“The city is essentially maxing out its credit card by providing $12 million in tax-increment financing for this project,” he said. “If this project happened without all the public subsidies, people might feel a little better about it, but this project is so heavily subsidized, that’s why people are upset.”

Warnock said Trinity members are also concerned about the impact the project will have on the community.

Moen said his team is working with the city’s Parks and Recreation Department to find the best way to redesign the park.

‘We don’t know what the new park will look like,” Moen said. “But we do know we want to enhance it in a way that adds to the Iowa City Farmers’ Market.”

“Moen has committed $500,000 to the redevelopment of this park, so we want to make sure we work with Parks and Rec to make it a better public park for everyone in the community,” he said.

While the issue winds its way through court, Moen said, at this point, he has one option.