Public holds forth on equity 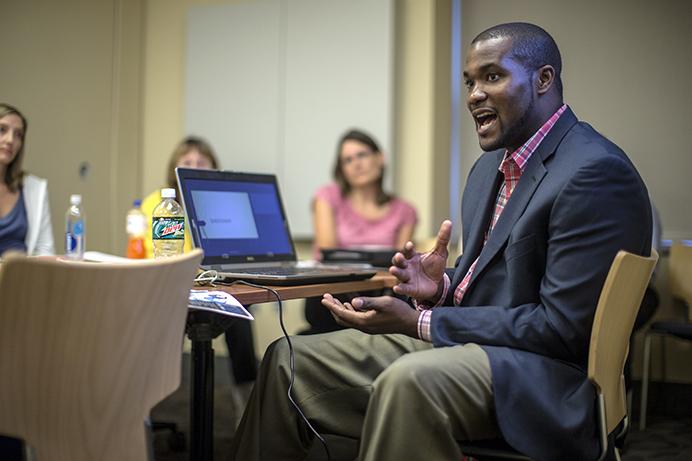 Monday’s meeting was an opportunity for members of the public to provide feedback on the School District’s new Comprehensive Equity Plan, district Equity and Staffing Director Kingsley Botchway said.

“There was definitely a bigger turnout then I expected,” he said. “It’s good people are getting out, looking at this plan, and giving feedback on it.”

The Equity Plan outlines steps the School District plans to take to include all students in the learning experience in the district.

Issues brought up at the meeting included discipline in schools, district hiring practices, and retaining a diverse teaching staff.

Latasha DeLoach, a community program specialist in the Johnson County Social Services Department and a candidate for the School Board, said the poorly defined discipline policy is hurting families in the district.

“We have kindergarteners getting out-of-school suspensions for acting out,” DeLoach said. “This disproportionality affects poor families, because you can’t afford to have someone come and watch your child; you’re going to have to miss work, which results in lost income.

“If they’re out of school, we’re part of the problem.”

Botchway said he would like to see diversity as new staff is hired throughout the district.

“We want the best and brightest working in this district,” he said. “That won’t change as we try to increase diversity in our workforce.”

Abby Haywood, a master’s student in music education at the University of Iowa, said ingrained ideas needed to change in order for the district to retain a diverse teaching staff.

“We have to think about ingrained ideas of ‘competence’ in this community,” Haywood said. “You very rarely hear a white person being described as ‘competent’ for a position, while you hear it all the time when talking about a black person; this is setting blacks up for a different experience in the community than others.”

Clair Rudison, a job developer at the Evelyn K. Davis Center in Des Moines said emotional intelligence is something that needs to be considered when hiring teachers.

“Just because someone might not speak as eloquently as others does not mean they are any less qualified for the job,” he said. “As long as they’re putting out quality kids, it shouldn’t matter.”

The Rev. Doyle Landry of Positive Vision Ministries said race is an issue that needs to be discussed and not just in the School District.

“There is no accountability in Iowa City when it comes to race; when you ask for accountability, that’s when people get offended.” Landry said. “Discussion about racism and students go hand in hand, and people don’t want to address it.