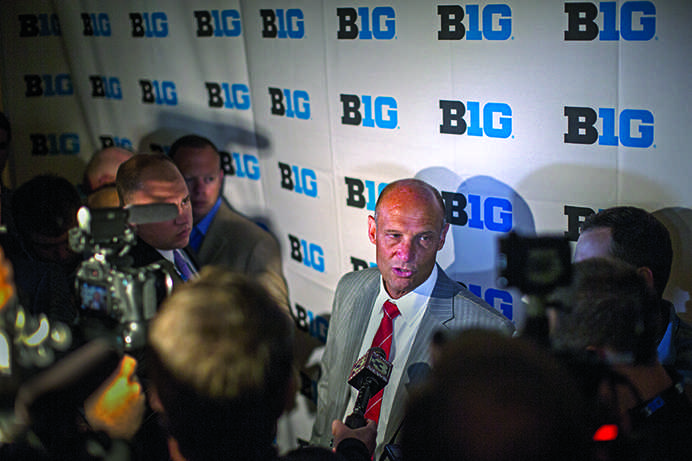 The Big Ten’s three newest coaches know one another better than you might think.
By Charlie Green
[email protected]
CHICAGO — After nearly four decades of coaching, the winding road that had been Mike Riley’s coaching career appeared to be on the straight and narrow.

He had just finished his 14th-consecutive season at the helm of Oregon State when Nebraska called, looking for someone to replace former coach Bo Pelini.

For some insight into the program and the Big Ten as a conference, he approached longtime friend Paul Chryst, at the time the head coach at Pittsburgh.

“Paul and I used to watch a lot of film together,” Riley said. “I don’t know if we’ll do that much anymore.”

Nebraska introduced Riley as head coach on Dec. 5, 2014; Wisconsin did so with Chryst about a week later. More than two decades earlier, the two coached together, not in the NFL or college, but in the World League of American Football — an NFL-owned startup league.

The two began their football relationship in 1991, when Riley brought in Chryst as an assistant coach of the San Antonio Riders. Riley’s staff consisted of six people — all in it for the love of the game, ingesting a steady diet of popcorn and game film.

“Paul and I, we’d practice in the morning, we would go for a run, we’d come back, get the popcorn up, and we’d watch film all afternoon and night,” Riley said, “And it was a great life.”

Both moved on after the 1992 season, but it wasn’t long before they met again — this time in the NFL.

After his first stint with Oregon State in 1997-98, Riley agreed to become the head coach of the San Diego Chargers in January 1999, bringing Chryst on as his tight-end coach.

With a struggling, troubled, and unproven Ryan Leaf creating doubts about his future as the team’s franchise quarterback, the Chargers brought in a veteran Jim Harbaugh — who started 12 games for the team that season.

The Chargers finished 8-8, 6-6 with Harbaugh under center. In 2001, the team took a turn for the worse, finishing the season 1-15 as Harbaugh started just five games. It was the last season he saw game action as an NFL quarterback, never forgetting the impact Riley had on him.

“He’s steady, a rock, the highest caliber of character,” Harbaugh said. “It was a real blessing to be in the path of Mike Riley and share those two years with him.”

Harbaugh started 17 games in his two seasons with the team, throwing for 4,177 yards with 18 touchdowns and 24 interceptions — while leaving an impression on one of his coaches and future colleagues.

“At that time you saw was a guy that was a true veteran and a great teammate,” Chryst said. “He would help all guys, he was a real teammate, and a guy who kind of epitomized what a football player was.”

Riley and Chryst lasted one more year, going 5-11 in 2001 before the Chargers parted ways with the regime. Riley went on back to Oregon State, where he spent the next 14 years.

Chryst moved back to his alma mater, Wisconsin, eventually serving as the offensive coordinator under Bret Bielema from 2005-2011. His reputation as an offensive strategist, along with consistent production from the Badgers’ high-powered rushing attack, earned him a head-coaching job with Pittsburgh in 2011.

When the Wisconsin job opened up for the second time in three years in the wake of Gary Andersen’s move to Oregon State, Chryst came home to Madison for his dream job as head coach of the Badgers.

Harbaugh saw success as a coach at the college level at the University of San Diego and Stanford, and he followed with a four-year stint with the San Francisco 49ers that ended in a fallout with front-office executives despite three trips to the NFC Championship and one to the Super Bowl.

Fifteen years after the 2000 Chargers went 1-15, he, Chryst, and Riley are together again, this time as first-year head coaches in the Big Ten.

And Chryst and Harbaugh go back long before they met up in San Diego.

Harbaugh met George Chryst, Paul’s father and coach of University of Wisconsin-Platteville in 1987, during his first NFL training camp with the Chicago Bears. One year later, Bear coach Mike Ditka brought in Paul’s brother Geep (now the offensive coordinator of the 49ers) to help with training camp as well.

“I first met George when I got drafted to the Bears; we did our two-a-day practices in Platteville, Wisconsin,” Harbaugh said. “Geep was there, Coach Ditka hired him the second year that I was with the Bears, so I became really close friends with Geep.

“It’s been a lifelong friendship with the Harbaugh family and the Chryst family.”

From the Chicago Bears to the San Antonio Riders to the Chargers and a decade-and-a half later each coaching his own Big Ten team — Nebraska, Wisconsin, and Michigan — storied programs with hopes of closing the gap with national champion Ohio State.

Riley and Harbaugh have spent time coaching against each other in the Pac-12, and Chryst spent time as a Big Ten assistant and head coach in the ACC.

Different twists and turns in each man’s road has led them here, the 2015 season. Who knows where the road will bring them next.

While Harbaugh has his hands full in the East with Ohio State, Penn State, and Michigan State, Wisconsin and Nebraska figure to be the key players in the West — where Riley and Chryst will meet for the first time as opposing head coaches on Oct. 10 in Lincoln, Nebraska.

This is where the road of football has led them, and it may not be the final stop. Whatever the case be be, Riley remembers the ones that have made the journey special.

“We’ve coached college together,” Riley said. “We coached some pro football together. And through all that time, we’ve just had a lot of fun talking about football, family, all the things that go into life.”

Follow @charlsgreen for news, updates, and analysis on the Iowa football team.